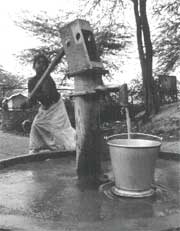 tetrachloroethene is a prominent groundwater pollutant that is suspected to be a carcinogen. A team of experts on microbiology and environmental engineering from the Cornell University, Ithaca, New York, have isolated Dehalococcoides ethenogenes (also known as strain 195), a bacterial strain that can dechlorinate this toxin into ethene - a non toxic hydrocarbon ( Science , Vol 276, No 5318).

This discovery could be used for bioremediation - the use of selected microorganisms to break down toxic substances. Tetrachloroethene, also known as perchloroethylene ( pce ), is found in waste dump sites in the us ; remains of times when chlorinated solvents were poured into the wastewater system of towns. The chemical was discovered in 1821 but its widescale production started only in the late 1940s.

The rapid evolution of the microorganism has intrigued scientists as chlorinated solvents have not been in use for a long duration of time. What is more important, however, is the harnessing of the bacterium to clean up toxic waste dumpsites with chlorinated solvents. pce is still used in thousands of dry-cleaning establishments in the us. An estimated 40,000 tonnes of chlorinated solvents, including pce , are also used annually. Unlike in the past, when the solvents were recklessly dumped at waste sites, strict measures govern the disposal of the substances in the us today.

Once dumped on the ground, pce can sink to the floor of aquifers directly below the water level, as it is heavier than water. Though the compound is not entirely soluble in water, a small quantity is quite dangerous. Reports say that nine of the 20 most common chemicals found in groundwater are chlorinated solvents. With the toxins ranking so high on the list of hazardous substances, there is considerable interest in ways to get rid of them. Success rates from previous methods of removal of chlorinated solvents has not crossed the 85 per cent mark, which is not good enough.

Many scientists have been trying to find a microbe that can digest the chlorinated solvents. In 1993, a bacterium was found to convert pce into vinyl chloride, a less chlorinated but more toxic compound. "They were turning a suspected carcinogen into a known carcinogen," says James M Gosset of the School of Civil and Environmental Engineering, Cornell University. But the idea interested him. This triggered the discovery of strain 195.

Strain 195 uses chlorine the way the human body uses oxygen. Critical energy-producing processes require the constant transfer of electrons. Air-breathing creatures have evolved to employ oxygen as an electron acceptor. Carbon dioxide and water are the by-products of the process. The pollution-eating microbe uses the chlorine in pce in the same way - but only in the presence of hydrogen, an electron donor. The metabolism of the microbe strips chlorine atoms away from the double-bonded carbon atoms at the core of the molecule, replacing each chlorine atom with a hydrogen atom. The chlorine atom is carried away as hydrochloric acid.

The findings do not imply that all of the chlorinated waste in the us can be dredged by dumping loads of D ethenogenes onto the waste sites. Strain 195 works in coordination with other bacteria that provide nutrients. Also, it needs a lot of vitamin b12. Isolation and analysis of the microbe will determine the most suitable process for it to function. Stephen H Zinder is part of the Cornell team. He says that it is important to find out whether microbes like the strain 195 are already present at the waste sites. "Maybe we are just beginning to touch on the diversity of organisms that can do this," he says.