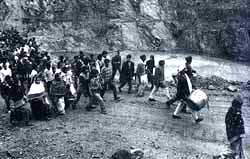 THE TEHRI dam project (TDP) is back in news. Even as engineering experts and scientists reiterated building such a high dam in a seismically sensitive region is hazardous, an offer from a consortium of Russian and Uzbek companies to finance the project brought joy to its proponents.

A two-day workshop organised recently in the capital by the Indian National Trust for Art and Cultural Heritage (INTACH) brought the controversy into the open. Bruce A Bolt, a University of California seismologist, explained that lack of said lack of critical knowledge about seismic activities in the Garhwal region made it difficult to deal with its unusual tectonic situation. Therefore, he said, "I believe it is important to assess each stage of the parameters in a conservative way, taking into account the consequences of failure."

The workshop generated vigorous debate on ways to make massive structures like the proposed dam less hazardous in the event of an earthquake. Most seismologists expect a major earthquake to occur in the region at any time in the next 100 years, as there has not been any tremor of great magnitude in the 300-km segment from Haridwar to Tanakpur since about 1850. "Surely, the stresses (due to the colliding plates) are progressively building up, as this segment is being strongly pressed and prodded by the Aravalli ridge of the northward-drifting Indian subcontinent," said K S Valdiya, professor of geology at Kumaon University. Only small to moderate earthquakes registering upto 7 on the Richter scale have occurred in garhwal and they were not strong enough to release the accumulated stresses, he added. Even the 1991 Uttarkashi earthquake measured just 6.6, and an 8 magnitude earthquake is needed to release accumulated stress, said other experts, including V K Gaur of the National Aeronautical Laboratory in Bangalore. He disagreed, however, with Valdiya's contention that a series of small dams would be less hazardous than a big dam. "There is not enough data to prove this," Gaur commented.

The environmental implications of Tehri dam were kept out of the workshop's purview, but the participants were unanimous that a more sophisticated analysis of the dam is essential and preferable to the analyses made so far.

Ironically, the earthquake fear is being reiterated just when the Russian-Uzbek proposal has arrived. The offer involves financing as much as 85 per cent of the project costs, currently estimated in excess of Rs 5,000 crore. The offer has come as a reprieve for the Union power ministry, which has been unable to find an alternative-funding source of funds since the break-up of the original sponsor, the erstwhile Soviet Union. Subsequent Russian insistence that the original soft loan terms must be stiffened had made things difficult for power ministry mandarins.

For some time now, environmentalists opposed to the Tehri dam had been complacent, believing the project would be abandoned due to lack of funding. Their fear now is that the government may be tempted to go ahead with the project after implementing steps recommended by a three-member expert committee to make the project feasible.

But Shekhar Singh, director of the Indian Institute of Public Administration, who has petitioned the Supreme Court, challenging the Tehri project, says funding "is not the critical issue. Safety of the people and environment is the main issue."

Shekhar Singh's petition, filed along with INTACH's N D Jayal last year, is pending in the Supreme Court. The ministries of power and of environment and forests have yet to file their replies and Singh concedes the petitioners themselves have not pushed the matter. "We feel it (the project) will die a natural death," he says.