Developing hydrogen as a petrol substitute 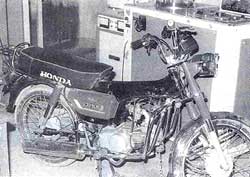 TOMORROW'S cars and motorcycles may operate on hydrogen, instead of petrol, if early successes with prototypes are an indication. A Benares Hindu University (BHU) team in Varanasi, led by physics professor O N Srivastava, has succeeded in operating a hydrogen-powered motorcycle on the street. And, H B Mathur, a professor in the mechanical engineering department at the Indian Institute of Technology, Delhi, has developed an internal combustion engine that works entirely on hydrogen.

Scientists say hydrogen offers the ideal solution to the fossil fuel crisis, as it can be produced in virtually unlimited quantities from water. Not only is hydrogen odourless and non-toxic, it is also one of the cleanest fuels, producing water vapours when it is ignited instead of the carbon monoxide, hydrocarbons and lead that burning petrol emits. Small quantities of nitrogen oxides are the only pollutants from burning hydrogen and experts say these can be easily controlled. Being light, hydrogen allows easy transport and being less combustible than either gasoline or methane, it is one of the safest fuels available.
Greater efficiency Describing the hydrogen engine that he had designed, Mathur said it resembled a 4-kilowatt genset. His engine converts heat to mechanical energy and is 25-100 per cent more efficient than conventional gasoline engines.

But, Mathur warns, among the technical problems associated with hydrogen-powered engines is a loss in efficiency because hydrogen is subject to a sharp rise in pressure during compression and this may cause it to be ignited before the end of the engine's compression stroke.

He has been able to solve this problem, however, through the use of a specially designed injection system that mixed hydrogen and air before ignition. The hydrogen, he explains, is injected periodically into the combustion chamber with the timing being determined by engine parameters, such as speed and power. "This injection system is a frontline technology by international standards," Mathur contends.

Noting hydrogen's high inflammability, Mathur warned engine compression needs to be carefully controlled to prevent a gas explosion. This makes stringent safety measures necessary and he asserts "the IIT genset satisfies rigorous safety requirements. It has been operated for more than 2,000 hours without a problem."

Mathur has also researched the problem of converting with minimum modifications, existing gasoline engines so that hydrogen can be used as fuel. So far, he adds, his findings are that relatively complex and expensive changes need to be made to a petrol engine to convert it to work on hydrogen. He is also working on a dual-fuel mode, in which both diesel and hydrogen are used as fuel during different stages of the combustion cycle. With minimum engine modifications, this will enable the driver to switch back and forth between hydrogen and diesel.

Special injector In BHU, scientists made a few modifications to a conventional motorcycle and successfully tested its efficiency using as fuel chemicals known as hydrides. These store and release hydrogen as and when required and much of the BHU research is directed towards obtaining appropriate hydrides.

In the BHU experiment, hydrogen is passed through hollow aluminium cylinders packed with a storage alloy known as mischmetal pentanickelide. The gas and the alloy combine to produce mischmetal pentanickelide hydride. A pipe carries the hydrogen from the hydride-filled tank to the engine through a special, BHU-designed injector. After the hydrogen burns, the water vapour produced is emitted as droplets through the exhaust pipe.

Srivastava says in his prototype, the hydride tank is positioned near the exhaust pipe in a conventional motorcycle to ensure hydrogen supply is continuous and the gas rises easily to engine level. It is essential, he adds, for the temperature in the hydride tank to be maintained at 80o C to ensure continuous supply of the gas. This is achieved, he says, because the hot water vapour emitted warms the hydrogen as it condenses to water.

The hydride tank, according to Srivastava, weighs about five kg and has a life of about 25 years. He claims that the vehicle can run for about 25 km on a single hydrogen charge. Srivastava's team is working on an improved twin-hydride tank model that he hopes will increase a single-charge run to 100 km. For longer distances, he adds, the user will have to switch to petrol.

Srivastava estimates the cost of converting a conventional bike to a hydrogen-powered one at about Rs 5,000, with negligible running costs. In fact, he adds, if the motorcyclist is using one litre of petrol a day, the conversion costs can be recovered within a year.

Producing the hydrides in the required quantity should not be difficult, Srivastava reckons, because the raw material -- monazite sand -- is found in abundance on the Kerala coast. "India has 40 per cent of the world's monazite deposits and if appropriate decisions are taken, we could well become a world leader in this field," says Srivastava.

Commercial organisations are reportedly evincing an interest in their work and Mathur disclosed, "We are presently negotiating with several industrial firms for commercial production of the engines." As for Srivastava, he says his group has received a collaboration offer from Italy-based Oak Ridge Atom Industries (Italia).