Drilling down the dumps 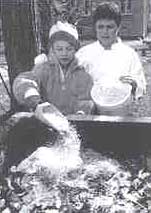 SINCE July last year, the municipal garbage dump at Gladokvarn, outside Stockholm, has been yielding gas at the rate of 22,000 in per day from gas wells up to 20 in deep. The gas is carried via a 13 km-long pipeline to a 5 mw heating plant which, in turn, supplies central heating to the nearby Skogas housing estate - enough to heat some 2,500 single-family houses.

It is a well known fact that household garbage, compacted over long periods of time, creates large quantities of methane gas. Many attempts have been made in the past to bring the gas to the surface and harness it, not just for commercial purposes but also to prevent it from leaking into the atmosphere and contributing to the greenhouse effect.

The technical problems involved, however, have been difficult to solve. The main problem is to be able to drill large and deep well holes through layer upon layer of material containing such a wide variety of waste. However, engineers in Sweden claim to have found almost a complete answer.

The drilling at Gladokvarn was carried out by Svenska Borr AB, using an Atlas Cop Geodrill 800E equipped with a six-inch-hollow stem auger, a drilling tool. The hollow stem auger is normally used for soil investigation, groundwater monitoring and well-drilling. The auger has no trouble with small metal objects and simply pushes larger objects aside. Wood, concrete and stone can give some problem by slowing the rotation down, but generally speaking, it drills right through without stopping.

During the first two weeks of drilling through the compacted household waste consisting of every conceivable type of material, eight holes varying from 15 in to 20 in deep were drilled. The engineers soon learned to operate the wireline system. The deepest hole drilled was 22 in deep and was completed in less than 24 hours. Now almost 70 holes have been drilled, of which about 50 are active.

The company claims that it is the first in Sweden and probably one of the first in Europe to use a hollow stem auger for this type of work, which although not problem-free, is vastly superior to conventional drilling in these circumstances.