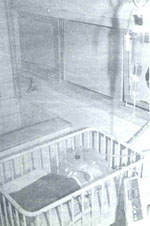 STRONG medicines have severe side-effects because the influence of toxic drugs often goes beyond the infection to include the body's healthy tissue. Now, biological chemists hope that better targeting of the drugs can be done through liposomes -- little artificial fat globules that can enclose drugs or other chemicals inside them, much the same way as a soft-centred sweet -- that can release the chemicals at the infected or diseased site.

Liposomes are similar to membranes that enclose animal cells, and are ideal drug carriers as they are biodegradable. And these liposomes are also being used to develop effective techniques to diagnose disease.

N A Kshirsagar, a pharmacologist at Bombay's Seth G S Medical College and her colleagues have successfully used liposomes to administer amphotericin B -- an antibiotic drug used widely to treat internal fungal infections -- to patients at Bombay's KEM hospital. The drug is also used to treat kalazar. Although other antifungal preparations are available, amphotericin B is the prefered drug: unfortunately, it leads to severe side-effects like vomiting and fever; in the long term, it can also affect the kidneys.

In the search for a safer system to use this drug, Kshirsagar hit upon the idea of using liposomal amphotericin B, developed in India initially by Bimal K Bachhawat and his colleagues at Delhi University's Liposome Research Centre. These liposomes were derived from soyabeans, and Kshirsagar and her team refined and modified the production of liposomes to make them usable in human beings. These liposomes are taken up by the white blood cells and they rupture releasing the drug.

The drug-containing liposomes were tested on 100 patients with fungal infection and 20 patients who were suffering from kalazar. According to Kshirsagar, the drug contained in the liposome worked well in patients both with fungal infection and with kalazar. "More importantly," she explained, "it was safe and effective even in patients who had weak kidneys or had had kidney transplants." She points out that the preparation of the drug is easy, even though the raw materials are fairly expensive.

Kshirsagar revealed that a few pharmaceutical companies have expressed an interest in her group's work; once trials on a larger number of patients are completed, the drug could be marketed. Moreover, she is hopeful that liposomes can be used to deliver drugs to treat not only kalazar and fungal infections, but also diseases like tuberculosis.

Meanwhile, Bachhawat and his colleagues in Delhi are exploring other applications of liposomes. For instance, Sofia Mumtaz, also at the Liposome Research Centre, is trying to treat certain disorders that are caused because the body is deficient in particular enzymes by introducing the biochemicals into the body through liposomes.

Mumtaz has successfully incorporated the enzyme dextranase which breaks down dextran -- a sugar compound which is difficult to degrade, and can accumulate in the liver in what is known as a "storage disorder". She found that the liposomes containing dextran were taken up by the liver and there they reduced the concentration of dextran by almost half. The use of liposomes averted the strong immune reaction that normally takes place when enzymes are introduced into the body. By delivering the enzyme to the liver directly, liposomes were also able to avoid its getting diluted and losing its efficiency.

Because liposomes can enclose several different types of chemicals, scientists are also using them in tests to diagnose disease. A dye or marker is incorporated into the liposome, which is coated with an antigen, usually a protein found in the disease causing organism. This is then made to react with a patient's blood which may contain antibodies -- substances which can destroy the antigen. These antibodies react with the antigen, releasing the dye inside which can then be measured.

Using this principle, Bachhawat's group is trying to develop what is called a 'liposome immune lysis assay, or LILA test; he points out that as yet the liposome is not as stable as they would like, and the dye tends to leach out. Moreover, he explains that commercialising such diagnostic tests would take a long time as the process of deriving them from soyabean is expensive.

As an extension of this work on liposome, Debi P Sarkar and his colleagues at the LRC are working on what they call virosomes. These comprise the outer coat of a virus, into which is encapsulated the compound of interest. Sarkar explains that these virus outer coats have certain proteins on them, known as fusion proteins, which can recognise their counterparts on human cells. Once they do this, they can fuse with the cell and empty their contents into the cell.

Sarkar is hopeful that once he standardises the procedure, it can be used even to incorporate foreign DNA or genes into cells, opening up possibilities for gene therapy. Using these virosomes, he has successfully targeted a highly toxic drug to certain liver cells. He points out that this technique could also be used to deliver vaccines in the future.