Dying for a river 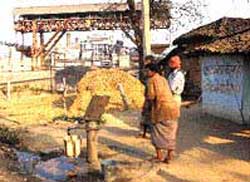 republic Day, January 26, 1998. Charan Das Mahant, home minister of Madhya Pradesh ( mp ), has just finished hoisting the national flag in the town of Raigarh. A few hours later, Satyabhama, 45, a tribal woman from the nearby village of Boda Tikra who has been on a hunger strike for three days dies in the district hospital. The strike was the flashpoint of a three-year struggle of 33 water-scarce villages for their sole source of water, the Kelo river, from a steel plant owned by Jindal Strips Limited ( jsl ), a part of the Jindal group of Hisar, Haryana. jsl has laid claim on the river to run its captive thermal power plant.

The news of Satyabhama's death spread like wildfire. Tempers ran high as the townsfolk started gathering around the district collector's ( dc 's ) office. The home minister left in a hurry, cancelling prior appointments. It was only after the dc assured a magisterial enquiry that the crowd dispersed.

The villagers are continuing their fight against the state government's decision to allow jsl to use the Kelo's water. The 120-km-long river is an important source of water for Raigarh town and the numerous villages along its banks. Since 1995, jsl has been trying to draw water from the river, much to the ire of the residents of the area. Various expert groups comprising government officials have noted that the jsl move would lead to a water crisis. But the state government has bypassed experts at each stage and set up a fresh panel.

By late 1997, when the company was allowed to build a small dam and an intake well on the riverbed close to the city, villagers and the townsfolk initiated street protests. On January 19, 1998, the villagers started a sit-in at the city centre, and a hunger strike in batches of three. Two women and a man who comprised the first batch were hospitalised on January 22. Satyabhama began her turn, along with two others. By January 24, doctors attending on her recommended immediate hospitalisation, as she was very weak. "But she was admitted only on the 25th (by the police officials)