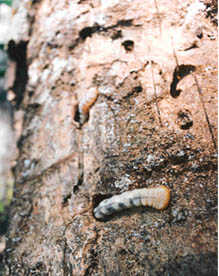 in the dense forest of Amarkantak, district Shahdol, Madhya Pradesh (mp) , where the river Narmada originates, the gurgle of the stream was difficult to hear amidst the monotonous sound of axes falling on giant sal trees (Shorea robusta). But for the timely intervention of Saifuddin Soz, Union minister of environment and forests (mef), about one million sal trees would have been cut in the state to prevent further infestation of trees by the sal heartwood borer (Hoplocerambyx spinicornis), a pest endemic to the region. However, by the third week of January, half-a-million trees had already succumbed to the axe before the minister could intercede.

Over one-sixth of the total sal forests in mp have been affected by the epidemic that has spread to six districts, covering an area of 300,000 hectares (ha). (ha). This includes Kanha National Park, the biggest tiger reserve in the country. In Mandla, the worst affected district, about 800,000 trees have been attacked. The total loss is estimated to be Rs 250 crore. Privately, forest officials admit that the number of trees slated to be cut is grossly underestimated. The present sal borer attack began in 1995, and would not have acquired epidemic proportions but for the inaction of the forest bureaucracy. By the time the state forest officials woke up, it was too late. The final solution according to the foresters: cut down all infected trees.

The axing was a low-key affair till Shiv Netam, mp"s minister of forest, was forced to inform the state legislative assembly in November 1997 about the drastic step. The opposition cried foul. A public interest petition was filed in the mp High Court. The mef constituted a committee headed by B N Gupta, director-general, Indian Council of Forest Research Education (icfre) , Dehradun, to investigate the cause of the epidemic, the extent of damage, and to suggest remedial measures. mp forest officials claim they had written to the icfre several times without any response.

Prodded by New Delhi, the committee visited the affected areas in district Mandla and conducted "extensive discussions" on December 14-16, 1997. The committee felt that the problem is of a serious nature but there is no need for "panic". On the other hand, the committee members who visited Jabalpur and Mandla said that the situation is "out of control". They warned that if preventive measures are not implemented in time, the situation may aggravate. The committee supported the large-scale felling of sal trees as the only way to ensure that the larvae die out, preventing yet another, larger cycle of infestation with the onset of the monsoon.

But a senior forest official, speaking "off the record", said that the committee report was wanting on the scientific aspects of the pestilence. Ram Prasad, director, Indian Institute of Forest Management (iifm), Bhopal, who is a member of the committee, refused to sign the final report. He alleged that he was not consulted before it was written. Doubts persist in the state about the failure of experts from premier forest institutes to develop safer alternatives, especially since the pest is endemic to the region. Prasad told Down To Earth: "Instead of straightaway cutting the trees, the forest officials could have looked for alternatives."

Not all forest officials agree with the "final solution". "They should have discussed the problem elaborately and searched for alternatives," says a senior forest official in Bhopal who did not want to be named. "It seems that the forest officials were more interested in cutting the trees than finding alternatives," says Prasad. State forest officials also drew flak from non-governmental organisations (ngos). Samar Singh, secretary general of World Wide Fund for Nature (wwf) India, says: "In this day and age when science has made so much progress, it is indeed sad that solutions other than large-scale felling of trees have not been suggested by experts."

Following wide criticism of the committee, a task force of environmentalists and foresters has been appointed by the mef on January 14 to take a fresh look at the sal borer menace. The task force will give its report within a month. Meanwhile, the formation of a steering committee to suggest long-term solutions was also announced on January 14, 1998. Ironically, the steering committee includes all but one of the members who were in the earlier committee headed by Gupta. The environment minister called a meeting of experts on January 14 that severely criticised the report submitted by the Gupta committee.

The Gupta committee"s argument that if affected trees are not removed before the monsoon, it would lead to a further spread of the pest also fails to stand its ground. Prasad insists that insects and pathogens are not the primary factors behind sal mortality. "Their role is only secondary, after the complex interaction among climatic, biotic and management factors have debilitated the trees," he says. According to officials, the sal borer started to emerge in the third week of June 1997 when the conditions were optimum - humidity was 91 per cent and temperature was 28