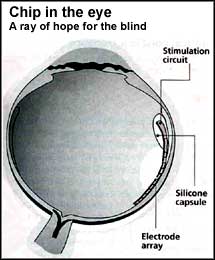 MICROCHIPS form the basis of several devices, such as Min (magnetic resonance imaging) scanners and pacemakers, which have revolutionised medical diagnosis and treatment. Now, microchips may also provide relief to many people suffering from blindness.

Researchers working on the Project for a Retinal Implant, a joint effort of the Massachusetts Institute of Technology (MIT) and the Harvard Medical School, have completed experiments that provide hope that a retinal implant may soon be a reality (Science, Vol 268, No 5211).

The scientists have finished a series of experiments in which prototype retinal implant components were used in rabbits. These devices were used to deliver tiny currents to the ganglion cells (nerve bodies in the retina that feed the optic nerve which transmits the information to the visual cortex in the brain) and a measurable response was detected in the visual cortex of the rabbits.

The components tested will eventually form a part of an artificial eye replacement kit that will include a miniature camera mounted on eyeglasses, a laser beam to transmit the information and a microchip to convert light into electric pulses.

The camera will record the information in the visual field and digitise it for the laser to beam it to the retinal implant.

The retinal implant will be a microchip with an electrode array to convert the laser pulses into electrical signals which then stimulate the ganalion cells to transmit the information In the brain.

Though this is the ultimate goal, ray of hope for the blind there are still many hurdles to be crossed before it can be realised.

First, there is still some controversy on how many healthy ganglion cells are there in the retinas of blind human beings. After all, because it is the ganglion cells which are ultimately ation transmitting the information, there should be enough healthy ones to do the job.

Experiments conducted at the Johns Hopkins University Hospital, Baltimore, have indicated that there may be as many as 70 per cent healthy ganglion cells in patients with outer retinal degeneration. cone Even if the ganglion sule cells are healthy, the implant has to be such that the retina is not harmed physically. This tissue, says John Wyatt, an MIT CeC trical engineer, has the mechanical properties of about one ylayer of sticky wet Klccnex." And that doesn't make things easy, as the implant's electrode array, made of polymicle plastif 50 microns (a micron is a millionth of a metre) thick, has razor-sharp edges, Before insertion, therefore, the array is coated in silicone and bent to match the retina's own curve, so that it rests on the surface without tearing it.

Finally, there is the most daunting problem of the chip communicating the information with the visual cortex in a form that can be recognised by the brain.

The ganglion cells in the retina arc highly specialised and diverse types of these cells respond to different aspects of the stimuli like colour, intensity and movement. To determine exactly how to stimulate the ganglion Cells to Cause them to lire in an interpretable way is one of the major unsolved problems.

Some 1.2 million people world- wide suffer from eye ailments that lead to blindness because the visual receptors in the retina are lost. Though the day when all these problems are solved successfully is still far off (some sceptics claim at least half a century away), continuing research provides a ray of hope.