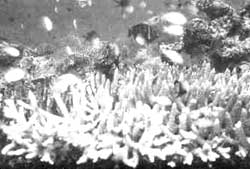 AWE-STRUCK tourists look down through the glass-bottomed boat only to be welcomed by an explosion of colours on the ocean-bed. Deep blue, bright yellow, red with streaks of white - colours of the corals.

Welcome to Andaman's folly Boy island, where these corals draw a large number of tourists every year. However, very soon, warn experts, this riot of colours may disappear forever. According to a report prepared by R Soundarajan and his colleagues from the Society for Andaman and Nicobar Ecology (SANE), corals here are in danger, owing to "mass bleaching...in the coral reefs throughout the length and breadth Andaman group of islands". This problem, said the report, has been threatening the corals since early May.

Soundarajan, who is a marine scientist from Port Blair's Central Agricultural Research Institute (CARI), along with his team of researchers, is working on a project to study the state of coral reefs around the archipelago. The project has been financed by Worldwide Fund for Nature (WWF), India. He said that not only the corals but "animals of the coral reef community, like a few species of soft coral and giant clams have also lost pigments".

Though a partial recovery has been observed, bleaching of coral reefs remains, nevertheless, a matter of grave concern since the damaged reefs will disturb the delicate ecological balance of the archipelago.

Rich in biodiversity and one of the most biologically-productive marine ecosystems, coral reefs are the tropical rainforests of the oceans. Of the 0.6 million sq km of coral reefs in the world, half are in Asia. The niches on the reefs are home to countless life forms that sustain fishing and other activities in a marine economy. In India, these reefs offer a fishing potential of about 0.2 million tonnes. Island economies, such as in the Andamans, depend extensively on them, for fishing as well as tourism.

So why are these corals suddenly losing their colour? Corals, unknown to many, are living creatures. Corals that build reefs - hermatypic corals - host microscopic algae called zooxanthellae in their bodies. The relationship between the two species - the corals and the algae - is symbiotic, both drawing nutrients from each other tor survival. The beautiful colours these corals are known for comes from these microscopic zooxanthellae residing inside them. And coral bleaching occurs when, due to some reason, this delicate symbiotic relationship is disturbed. The zooxanthellae is ejected from the corals, leaving the white calcium carbonate of their skeletons visible.

Though bleaching of corals have been observed as early as 1928, first instances in the Indian Ocean were first noticed in 1991. These then recurred four years later, in 1995. But since early this year, extensive areas - from equatorial Maldives to North Andamans - have been affected. Hven corals over six metres beneath the sea surface have not been spared.

And according to Soundarajan and his fellow researchers, a rise in the mean surface seawater temperature (SST) is the central cause of this extensive bleaching. Barbara Brown of Newcastle University, USA, has noticed that over the last 50 years, the monthly mean SST has gone by 0.126