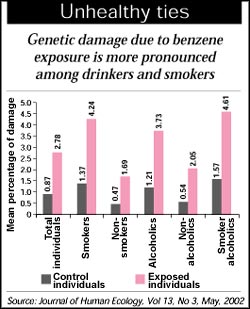 long time exposure to benzene has always been considered detrimental to human health, but now researchers from the Kurukshetra University, Haryana, have found that even an occasional exposure to benzene of an hour a day is sufficient to bring about adverse changes in genetic material of humans. Benzene is a colourless organic solvent that is implicated in causing diseases like anaemia and leukaemia.

The study was carried out on workers of offset printing presses. In these places, benzene is used at times to repair parts of rubber blanket that helps transfer ink image to paper. During their preliminary epidemiological study, the researchers found that most study subjects suffered from restlessness, muscle twitching, headaches and nausea. These problems were attributed to benzene exposure. "While these people did not show symptoms of any major disease, there is a fear that long time exposure can lead to cancer,' says J S Yadav, the lead researcher of the study.

To further emphasise the effect of the chemical, the scientists carried out a battery of cytogenetic tests on lymphocytes to determine how their genetic material was being affected. Participants of the study included 65 printing press workers and 65 unexposed people who were used as controls. People in both the groups were analysed on the basis of age, smoking and drinking habits. The data was then matched to find out the correlation with benzene.

Chromosomal aberrations in lymphocytes were found only in the exposed people. Among these, the frequency was higher in smokers and those who consumed alcohol. The frequency was much higher in those who both smoked and consumed alcohol. Moreover, the researchers found that chances of suffering from aberrations increased with longer durations of exposure.

Experts say that the findings are significant. "They would help create awareness about the risk posed by benzene,' says Yadav. According to him, the results suggest that the chemical should be used intelligently. "Even simple precautions like the use of rubber gloves while handling the material would be useful,' he says.