From the frying pan to fire 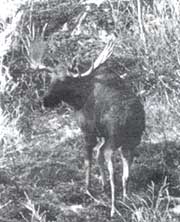 FOR the past 10 years, a large number of moose are dying in southwest Sweden. The cause for this is acid rain. Acidification and the declining numbers of this warm-blooded animal are being linked because of a complex chain of events, arising from the occurrence of the former.

According to Adrian Frank of the Centre for Metal Biology in Uppsala, Sweden, acid rain is indirectly responsible for the fatalities. To counter the effect of acidification on the environment, liberal sprayingof lime is a standard practice in the country. Since the early '80s-, wetlands, lakes, fields, pastuies and even some forested regions hav@ been limed following their acidification.

4 Ironically, it is the lime which has lead to an imbalance in the concentration of chemicals like copper and molybdenum in the animals' livers. The useof lime was intensified in the mid'80s which corresponded with the time kFn a large number of the animals began signaling the coming disaster as they contracted some diseases. The acid rain led to the destruction of blueberry bushes (staple diet of the moose), and the animals changed their feeding habits. They turned to cultivated pastures and fields of oat and rape, which were being heavily lithed by the farmers.

Frank explains that as and when acidification occurs, it decreases the PH level of the soil, and metals such as cadmium, zinc and, manganese - as a result of capillary action - move up to the top soil, getting ingested by herbivores in greater quantities. But molybdenum being less soluble in an acid-rich environment, stays put at a lower level. With the spraying of lime (done to neutralise the soil), the process reverses so that the plants now receive an overdose of molybdenum, while chemicals like cadmium become scarce. According to Frank, this excessive amount of molyb - denum plays havoc with the copper content in the ruminants' diet, decreasing it to such an extent as to lead to cop- per deficiency, which can at times prove fatal. The animals appear gaunt, and sport discolored hair and impaired immune systems. They tend to suffer from osteoporosis, ulcers, diarrhoea, convulsions, blindness and heart failures.

In 1982, Frank had collected liver and kidney samples from 4,360 moose, shot by hunters in Sweden. His study of 14 chemicals revealed that the copper content had gone down by 50 per cent in- the livers of the animals, but the quantity of molybdenum was up by 20- 40 per cent. There were significant changes in the concentrations of other elements like chromium, whose level was found to be extremely low too. "The condition of their kidneys also indicate severe metabolic disturbances due to the reductions in cadmium, magnesium and manganese," says Frank.

In a paper to be published by the American Chemical Society, Frank extols the virtue of the moose as an environmental benchmark. Since the moose live on a large variety of plants, they can be useful as reliable and sensitive indicators of environmental changes, providing information on the changes in the levels of all metals.

Frank believes that the people responsible for liming should realise the environmental consequences of doing so not only from the point of view of the plants, but also of the animals consuming them. But the Swedish Environmental Protection Agency has rejected his call for an urgent nationwide investigation on the probable effects of liming on wildlife. Alternate theories project the possibility of overpopulation or a viral attack, as being responsible for the declining numbers of the moose.