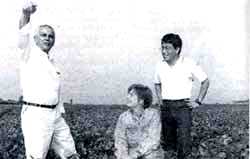 Thanks to the foresight of an American plant collector 20 years ago, several bean varieties are today resistant to a pest scientists had given up trying to control. During a trip to southern Mexico, H S Gentry recognised a wild vine considered a useless weed was, in fact, a wild bean. He saved a handful of its seeds and deposited them at the International Centre for Tropical Agriculture (CIAT) in Cali, Colombia. Scientists there discovered the wild bean contained arcelin, a protein that blocks the weevil bean pest's digestion and kills it. CIAT scientists bred the arcelin gene in 160 experimental lines in Africa and Latin America and found them to offer stable resistance to the weevil bean pest.