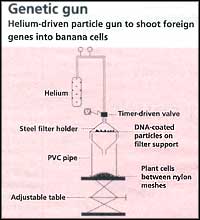 TWO groups of scientists have developed techniques to genetically alter banana (Musa species) cells to make the plant disease- resistant and introduce other improvements in it. This is significant when one considers that in some areas of the world up to half the banana yield is lost to fungal and viral diseases genes into and to pests.

While a group of Belgian scientists reports 2 techniques to develop transgenic (containing foreign genetic material besides its own) bananas with high resistance to Steel filter insects, viral diseases and fungal pathogens, another group of researchers has demonstrated how foreign genetic material with favourable traits can - Adjustable be incorporated into the plant using a bacterium (Biotechnology, Vol 13, No 5).

Banana is the staple food for almost 400 million peopl6'worldwide (that's nearly half the population of India). Its global production of 76 million tonnes makes it the fruit crop with the highest yield in the world. About 10 per cent of the world's banana production generates large revenues to the tune of over us $4 billion through exports.

Even though banana contributes to both food security and export revenues in developing countries, the production of the crop is totally depenclant on plant-clones that are collected in nature, domesticated and then maintained by clonal propagation. The crop has never benefited from traditional crop breeding methods.

Conventional breeding methods to develop improved varieties are not used to produce disease- resistant bananas because the techniques require as long as 10 years to bear results. Besides, most edible banana varieties are sterile because the plant is a triploid (having 3 sets of chromosomes. Hence, they can- not pair and this causes sterility). In order to transfer genes into the banana plant, an efficient genetic transformation method and regenerabie tissues are required - both the conditions have now been met.

The techniques developed by Laszlo Sagi from the Laboratory of Tropical Crop Husbandry, Catholic Univers Leuven, Belgium, and colleagues exploit the recent setting up of regenerable embryogenic cell suspensions (ECSS) Of banana. ECSS of banana are solutions of liviiig banana cells from which a plant can be developed.

The first method uses high voltage electric fields to inject foreign genetic material into banana ECSS. This method enables avoidance of chimerism - the occurrence of genetically different tissues in the same organism - which is a frequently observed phenomenon in transgenic plants.

The second method is the particle bombardment technique which uses a helium-driven gun to shoot foreign genes which code for several antifungal proteins and are obtained from the seeds of different plant species, into ECS targets. The antifungal proteins that the foreign genes code for are harmless to both the banana cells and humans. The major fungal diseases that strike banana crops are Black Sigatoka, which is caused by Mycosphaerella fijiensis, and Panama disease for which the causal agent is either Fusarium oxysporurn or cubense.

The Belgian scientists had specially designed a particle gun for their experiments. The target plant cells were placed between nylon meshes and then sandwiched between a Pvc pipe and a table whose height could be adjusted. Different lengths of Pvc pipes were used on different target cells. The particle bombardment technique has been perfected in the case of banana and has proved simple, inexpensive and efficient.

In another development, a team of scientists under a joint project of the Food and Agriculture Organization and the International Atomic Energy Agency, has used a bacterium called Agrobacterium to induce foreign genes into banana cells. The team, led by Gregory D May of the Institute of Biosciences and Technology, Texas A&M University, Houston, cultivated banana tissue samples with the Agrobacterium for 4 weeks and found that the banana cells had incorporated the foreign genes. This method, the scientists claim, could be used to introduce value-added traits into the banana plant.