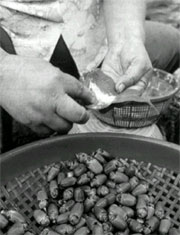 betel chewing is a national pastime in Taiwan. But now Taiwanese officials have decided to destroy the plantations that are growing on government-protected land, shut down the roadside stalls and impose a sin tax on betel nut vendors. While the official campaign against the betel nut chewing may be something of a moral crusade, there is growing evidence that the popular recreational pastime increases the chances of contracting oral cancer. In Taiwan, the oral cancer rate is almost three times as high as in the us , and four times higher than that of Japan. Tsai Ming-shou, a doctor at Taipei's Chang Gung Hospital, claims that about 80 per cent of his oral cancer patients are betel nut chewers. Between 1976 and 1994, oral cancer rates skyrocketed from one person per 1,00,000 to eight person per 1,00,000 - and 88 per cent of those diagnosed were regular consumers. According to the British medical journal, Lancet , the high copper content in the betel nuts may be the cause of oral cancer. Betel nuts contain large amounts of the mineral compared to other nuts