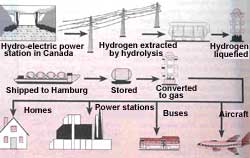 an international project to supply large quantities of hydrogen for use as a transport fuel and to generate electricity will go into operation by the end of the century. Experiments are taking place on hydrogen-powered engines for motor vehicles and for the Airbus, the European aircraft. The project called Euro-Quebec Hydro-Hydrogen Pilot Project has been initiated by two German engineers, Joachim Gretz and Fritz J Sandmann ( Electricity International , Vol 8, No 8).

They have planned to ship hydrogen, which is environment-friendly, from Canada. The electricity generated in a Canadian hydro-electric power station is used to split up fresh water into its component parts, oxygen and hydrogen.

The hydrogen is then liquefied, brought to Hamburg, Germany, in special tankers and distributed to consumers. The main advantage of hydrogen as a fuel is that its combustion with air primarily produces environment-friendly steam and only a little of the damaging nitrogen oxides. Hydrogen is also the most abundant element in the universe (55 per cent). The technical extraction of hydrogen mainly takes place by decomposing steam using coal, crude oil or natural gas. Extremely pure hydrogen is obtained when water is decomposed electrolytically.

Sandmann hopes that the first tanker will come up the River Elbe, Hamburg, in 1998. Neither Sandmann nor Gretz deny that many obstacles lie ahead. More than us $8.9 million (a third of which has been financed by industry, the European Commission, and Canada) has been invested so far in research and development. Sandmann says, "We are now building the system's critical components to prove that the project is economical'.

Trial projects are being carried on in Genoa, Italy, Brussels in Belgium and Munich in Germany, where buses are being equipped with various types of hyrogen-driven engines. Another trial will probably be carried out in Brazil, where hydrogen will be used to extract iron ore. A corresponding use for steel works in eastern Germany is also under consideration.

Work on the construction of a hydrogen combustion chamber for the Airbus is also on. A major problem at the moment, however, is that the steam produced during the combustion of hydrogen increases the risk of freezing at high altitudes which could lead to a crash.

Experts at bmw (Bayerische Motor Werke) are trying to tackle the problem of handling and storing hydrogen. They have developed a special vehicle tank whose crash resilience will soon be tested. Another German company, the Thyssen-nordseewerke is working along similar lines with big tanks in which hydrogen is to be transported by sea.

For running hydrogen-powered buses in Hamburg, five big tanks will be unloaded from each tanker