Indian lunar mission to US aid 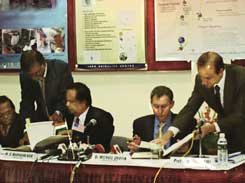 despite its continuing sanctions against some Indian space facilities, the us wants India to carry two scientific instruments aboard Chandrayaan-1, the country's first lunar orbiter scheduled for an early-2008 launch.

An agreement to this effect was signed between the us National Aeronautics and Space Administration (nasa) chief Michael Griffin and the Indian Space Research Organisation (isro) chairman G Madhavan Nair in Bangalore on May 9. Chadrayaan-1 will carry an American cargo of a specialist radar called mini-sar, which will look for ice deposits, and a moon mineralogy mapper (m 3) that will track mineral and chemical composition.

The addition of mini- sar, developed at the Johns Hopkins University, and m 3, built jointly by the Brown University and nasa's Jet Propulsion Laboratory, takes the total number of payloads on the lunar probe to 11. isro had earlier agreed to take three scientific instruments built by the European Space Agency and one payload developed by the Bulgarian Academy of Sciences to monitor radiation on the lunar surface.

The agreement marks the return of bonhomie to the Indo- us space relations after a long gap. Washington, which suspects India of using its space technology also to make missiles, had placed high-tech import controls on Indian nuclear and space establishments after the 1998 Pokhran- ii nuclear test blasts. Though the us later lifted the ban on several nuclear and space facilities, the Satish Dhawan Space Centre in Sriharikota from where Chandrayaan-I will be launched and the Vikram Sarabhai Space Centre in Thiruvananthapuram, which is making most of the indigenous payloads for the lunar probe, are among the institutions that still reel under sanctions.

Nair used the occasion to urge the us to lift sanctions on the remaining space facilities, too. Griffin said he would take "the word' to Washington, adding that the two countries should not "duplicate' their efforts and end up spending money on the same projects. "We are also looking at sharing of data for earth sciences and earth resources and broader scientific cooperation in exploring beyond the earth,' he said.