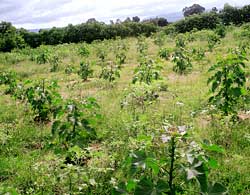 The Planning Commission's approach draft for the 11th Five-Year Plan has raised concerns regarding the environmental and socio-economic impacts of the ongoing jatropha plantations for developing bio-diesel in various parts of the country. The report says being a water-intensive crop jatropha plantations could lead to a drinking water shortage, and encroach on pastoral lands and animal habitats.