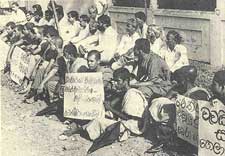 ENVIRONMENTALISTS and civil rights lawyers strongly oppose the Sri iLankan government's move to shift jurisdiction of all cases involving projects approved by, the Board of Investments (BOI) from district courts to the court of appeal in Colombo.

This means that a person may no longer petition a district court for an injunction to restrain the developer of a development project that could harm the environment.

"Rural people have now lost this easy and convenient right of redress," says Nalin Laddu- wahet@y, a lawyer representing the Mihikatha Institute, a Sri Lankan NGO. "As far as most people are concerned, this is as good as removing the right of petitioning altogether."

The decision to shift jurisdiction, taken under the emergency regulations in force in late 1992, is part of the government's drive to make Sri Lanka a newly industrialised country (NIC) by 2000, by boosting domestic industry and attractini foreign investors. As part of the drive to encourage industrialists to take advantage of the cheap, highly literate and skilled labour available in the island republic, export-oriented industries are being given unprecedented concessions.

Environmentalists contend this includes relaxation of environmental safeguards. They say the shift was decided in the wake-of the controversy Involving the five-star Kandalama hotel, which was to be built by a private company within the catchment area of the historic Kandalama tank in Central Province. Area residents, supported by environmentalists, political parties and the country's ubiquitous monks, contended the hotel would destroy the catchment area, pollute tank water and damage wildlife, the culture of local communities and availability of irrigation water.

Faced by the possibility that some residents might petition the district court in Matale against the Kandalama project, the governmeht acted in August 1992 to forestall any such attempt -by shifting jurisdiction to the court of appeal in Colombo.

"We feel that the two issues were dernanstrutors protesting som"ehow linked. Otherwise, why should the government rush to introduce these changes using the emergefcy powers?" asked Ladduwahetty.

Many NGOs, professional bodies and civil rights lawyers have pointed out that shifting jurisdiction handicaps the poor, who do not have the resources to seek redress in faraway Colombo. Besides, they say, the change will add to the backlog of cases pending in the court of appeal.

Nevertheless, there are some NGOs who say in private they prefer the new arrangement. Says one legal academic, the prospect of working in a centrally located court may be more convenient and lawyers also may be more at ease dealing with points of law, which is the main concern of the court of appeal. District courts also take into consideration complex issues that are characteristic of environmental cases.

Opponents of the government's move have one small consolation. As the move w&s niade under emergency regulations, it will lapse with the lifting of emergency. But in embattled Sri Lanka, that could take a long time.