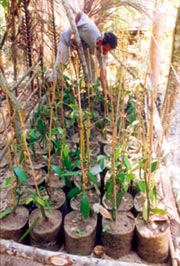 Thampi Thomas, an advocate-turned-planter of Kolenchery in south Kerala, sold raw vanilla beans for Rs 500 per kilogramme (kg) in 1999. During the current season, he got Rs 3,750 per kg for the produce. No single plant in his 3-hectare (ha) organic farm has ever fetched him such high returns. The rich pickings have prompted many a farmer in the state to plump for vanilla cultivation.

Those who have ventured into vanilla processing as well are making even more fabulous sums: nearly 10 times the price of raw beans. The international price of processed vanilla beans was us $200 in 2002 as against merely us $19 in 1998. Recently, the price soared further to us $350-400.

Experts, however, caution that overproduction could trigger a slump in prices. Growing vanilla may become a riskier proposition, too, what with the emergence of several soil-borne fungal pathogens and viruses since the drastic expansion of cultivated area.

Fungal infestation can also affect vanilla processing which involves two to three months of sweating, drying and proper storing. Then there are the vagaries of the highly unstable and speculative global vanilla market. Less than 10 corporate giants dominate the procurement of processed vanilla beans.
Vanilla's essence Vanilla is a climbing orchid valued for the pleasant flavour of its cured beans. Not only is it an essential ingredient in ice-creams and cakes, but also in bath products and body lotions. Vanilla-based fragrances are immensely popular across the world.

The plant is indigenous to southeast Mexico and originated in the humid tropical rainforests. Most of the world's vanilla production is concentrated in a handful of Indian Ocean island nations, mainly Madagascar and Indonesia. It is the most expensive spice after saffron, and faces competition from low-cost synthetic substitutes such as vanillin and ethyl vanillin.

At present the aggregate global demand for natural vanilla hovers around 4,000-5,000 tonnes per annum. This is expected to grow further with the consumers' increasing aversion to artificial products. "Even a 10 per cent substitution of the country's synthetic vanillin imports with natural vanilla would require a production of 2020 tonnes of cured beans and cultivation on more than 6,700 ha. This would be significantly higher than the modest level of 60 tonnes on around 1000 ha, which was recorded in 2002,' reveals Spices Board of India chairperson C J Jose. "In fact, India could be a major global producer of vanilla by 2007,' he adds. This doesn't appear to be a tall claim, considering that the total global production of natural vanilla was 5,583 tonnes in 2001.
Sprouting in the south Vanilla was introduced in India 200 years ago by the East India Company. Its cultivation and research were taken up in 1945 at the Kallar Fruit Research Station in the Nilgiris, and in the 1960s at the Horticulture Research Station in Kerala's Wayanad district. But the crop had no takers till the prices shot up in the 1990s. Of late, vanilla cultivation has risen sharply in the country, especially in the southern states of Kerala, Karnataka and Tamil Nadu. It is picking up in Orissa and the Northeast, too.

Kerala has witnessed a 25 per cent increase in area under vanilla in this year itself, point out spice industry observers. The yield period for the spice is short, small-scale cultivation costs are low and it can be grown along with other crops. Vanilla is, therefore, gaining space amidst traditional crops such as coffee, pepper, coconut and areca nut. The most immediate impact of this trend is that small farmers have opted for it in a big way.

In 1991, a group of only 14 farmers of Ramamangalam Panchayat in Ernakulam district started cultivating vanilla under a trial project of the Spices Board. "At that time, the raw beans fetched just Rs 100 per kg and it was difficult to market the produce,' says K V Mathai, president, All Kerala Association for Vanilla Cultivation and Marketing. The association now has 250 members, all of them small farmers. "Even at the lowest international price of processed beans over the past 10 years (us $19 per kg), the net income from vanilla cultivation during its 15-year economic lifecycle could come to Rs 28.67 lakh per ha,' notes a status paper of the Spices Board.

The boom has resulted in the adoption of new techniques by farmers through word of mouth. For instance, Varkkichen Koorithode, a traditional farmer of Kottayam district, introduced innovations like propping up the plant on branches of single Glyricidia plants and bending the leaves to induce early flowering.

Scientists had earlier recommended trailing the plant on multiple standards. But this method created problems in trimming the vine and during pollination. Koorithode's method has become popular among small farmers and has even won him an award.

The pitfalls
Sudden popularity has also meant greater peril. "I lost much of my crop due to diseases that might have spread from visiting farmers touching the plant,' laments A V Manoj of Kalloor near Sulthan Bathery in Wayanad. "Viral diseases like vanilla mosaic can spread through transfer of sap from a knife used to cut an affected leaf,' warns M R Shylaja of the Kerala Agriculture University's (kau) plantation crops research wing. According to scientists, any plant hit by the vanilla mosaic has to be destroyed completely. But several unscrupulous farmers of Wayanad are making a fast buck by selling cuttings from diseased plants.

With bean prices spiralling, farmers have increased input application, observes Shylaja. "Several new plant nutrients, bio-insecticides, growth enhancers, flowering fasteners and inoculums for composting are being used profusely, particularly in south Kerala,' she discloses. This despite the fact that kau has not recommended any chemical fertilisers for vanilla and the Spices Board, too, is promoting only organic disease control measures, says Shylaja. Ayurvedic preparations such as