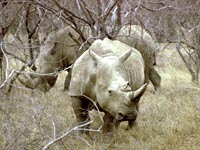 The pastures are turning brown for the five rare white rhinos which Zambia imported in 1994. The country is in the grip of a severe drought that has already claimed the lives of 48 other wild animals in the Musi-O-Tunya national park since June 2002.

Zambia Wildlife Authority (zawa) acting director-general Mukela Muyunda said, "The parched pastures have led to spectacular weight loss (among the white rhinos), which is not good for their survival and reproduction.' zawa would provide the animals with food supplements. But their long-term survival depended on normal rain patterns returning to the area, added Muyunda. White rhinos had become extinct in the region following widespread poaching.