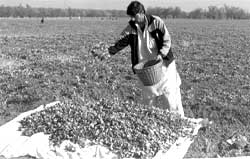 jammu and Kashmir is reeling under a drought-like situation that has wrought havoc with crop yields in the Valley. While it had taken its toll on paddy earlier, the dry spell has led to the failure of saffron crop now. The state's farmers have suffered heavy losses with almost 60 per cent of the total saffron plantation not yielding any produce in 2001.

Experts blame it on scanty and unscheduled rains. The absence of alternative irrigation facilities in the saffron fields has further compounded the problem. "Saffron crop needs rains during spring (for corn multiplication) and early autumn (to determine flowering pattern). In 2001, however, Kashmir witnessed hardly any rain during both seasons. This ruined the crop,' says Nazir Ahmad Rather, subject matter specialist in the department of agriculture, Kashmir.

The demand for Kashmir's saffron, known for its aroma and colour, is high. A kilogramme (kg) of saffron sells at up to Rs 30,000-40,000 in the international market. But for the last few years, its production has been plummeting. "The corn rot disease has also contributed to the low yield,' points out Ghulam Hyder, director in the state agriculture department.

The state's saffron farmers are on the brink of financial collapse. Conservative estimates put their losses at more than Rs 70 crore. "The farmers have become bankrupt and the state government is just a mute spectator,' laments D M Banday, president, Kashmir Saffron Growers and Dealers Union.

This year's crop failure has forced the state government to re-devise its strategy. It has launched a project to set up sprinkler irrigation pumps in the fields in a bid to irrigate the land at regular intervals. "We will also set up water reservoirs,' says Hyder.

But the farmers are sceptical. "In the past, too, the authorities have made grandiose plans. These have never translated into benefits for us. The government should give us aid so that we can repay our loans and tide over the crisis,' says Abdul Majid, a saffron grower.