Light from an area of darkness 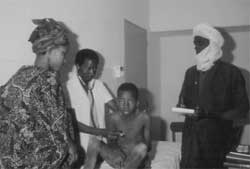 scientists in developed countries are trying expensive combinations of drugs to prolong the lives of those infected with aids. But something quite different is going on in Africa, where aids has taken a far greater toll. Experts are finding new hope in an old warhorse: the common antibiotic.

Antibiotics cannot cure aids, but they can be used to treat many sexually transmitted bacterial diseases that make people far more likely to contract and transmit hiv. So if doctors can cure more cases of syphilis, gonorrhea and similar illnesses, they are likely to reduce the number of people who may eventually contract aids.

The approach is considered as one of the first real advances in halting the spread of aids in Africa. For more than a decade, aggressive prevention programmes have made only a modest headway. Yet, in villages near Lake Victoria, in Uganda, a research team recently cut the rate of new hiv infections by about 40 per cent by providing clinics with enough drugs and trained workers to treat anyone with symptoms of a sexually transmitted disease (std).

Such an approach could be valuable for Third World countries like India, where the menace of aids is rapidly increasing. Tanzanian health workers are now applying these methods to most clinics in the region and are planning to expand them to the entire country.

The us Agency for International Development (usaid) is spending upto us $6 million over five years just across Lake Victoria to train workers in treating stds. In addition, us $10 million from a World Bank loan has been earmarked to supply drugs to the usaid project.

In the Rakal district of Uganda, a group sponsored by the Ugandan government and the John Hopkins and Columbia universities is providing antibiotic treatment to virtually every adult in 26 rural communities. "We are testing with an intensity that has never been done before,' said Maria Wawer, a Columbia public-health professor, who is directing the project.

The reason why genital infections increase hiv transmission is that many of the diseases create breaks in the skin through which hiv can more readily pass. But even without sores, genital infections can cause individuals to spread the virus more readily. For example, a study in Malawi showed that hiv positive men who also had urethritis, an inflammation of the urethra, had more than seven times as much hiv in their semen as did hiv positive men who did not have any other infection. After treatment for inflammation, the hiv concentration dropped significantly. Infections may also increase the susceptibility to hiv by flooding the genital area with white blood cells that become targets for the virus.

In Tanzania, research into the links with aids got underway in 1991. Experts conducted hiv tests on approximately 12,000 adults in six pairs of villages around Lake Victoria. Four pairs of villages were of rural farmers. One pair involved fishing communities on islands, and another pair was on major trucking routes. Of each pair, one village received greatly improved services for the treatment of stds while the other got standard treatment.

The high-intensity antibiotics are effective but are very expensive to be used on a wide scale. Also, it is hard to just concentrate on one specific area in health care