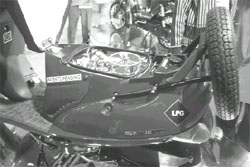 the media was recently abuzz about consumers being able to use liquefied petroleum gas (lpg) to power their vehicles very soon. The cabinet approval permitting lpg's use in automobiles in early April had raised hopes of legal sanctions being drawn out immediately. But this is easier said than done. The government and implementing agencies will have to make several procedural and technical amendments before lpg can be used in automobiles.

Although the cabinet has given its nod for the use of lpg to run vehicles, there are many rules that prevent its use. These need to be amended. Matters regarding its price and availability would also need to be sorted out as auto-lpg may not be subsidised like lpg for domestic use.

One of the important aspects of framing policies for the use of lpg is drawing out detailed safety standards as lpg could prove to be hazardous in case of leakage. A committee chaired by the chief controller of explosives is said to have met on June 2, 2000 to finalise these standards, the report of which is still awaited. Fuel specifications for auto-lpg have been drawn out by the Bureau of Indian Standards but are yet to be formally notified.

Apart from regulatory problems, in a recent submission to the epca, the Society of Indian Automobile Manufacturers (siam) has highlighted several technical difficulties in using lpg as a fuel. siam has asked for a lead-time of at least six months to standardise use of lpg fuel in petrol vehicles. They have also declared that the technology for use of lpg in two wheelers is in place but for it to be used in three-wheelers would take a minimum of one year.

siam has also almost denounced the conversion of diesel vehicles to lpg. According to siam, to run a diesel vehicle on lpg would mean altering the compression ignition engine to a spark ignition engine, cylinder head and piston would need to be redesigned and would also involve redesign of manifolds depending upon the kind of fuel induction system. It would also mean rechecking the valve and valve seat material, cylinder head cooling system reliability and whether the diesel engine would be able to run on duel fuel mode.

Air Pollution experts at the Delhi-based Centre for Science and Environment, a non-governmental organisation, are apprehensive about the impact of introducing lpg as an auto fuel. According to them, even after the Supreme Court mandated the use of compressed natural gas (cng), the government and other implementing agencies had to face tremendous hurdles and lobby pressure and after almost three years cng seems to be taking off.