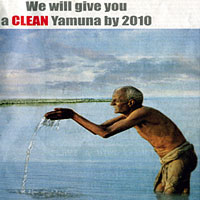 This is a message that has both sermons and promises. "Stop polluting the Yamuna now,' it says. We don't have to look far for the target of this admonition. Alongside is a non-descript person washing clothes in a river that is more likely to soil them. The promise then: "We will give you a clean Yamuna by 2010'. There is a visibly doctored image of water that would make Gangotri proud.

Sure as hell we know who has issued the message: the Delhi Jal Board. It promises interceptor sewers to take the muck away from colonies connected to Delhi's sewer system. It's another matter that the route they will take is all wrong. It is also forgotten that Delhi's sewage treatment plants never function optimally. Even if they did, they are inadequate. But who cares. The government is flush with Rs 3,150 crore.