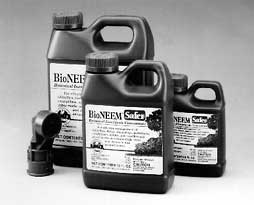 researchers in India are developing neem-based pesticides that could help increase crop yield without harming the environment. G P Gupta and Kirti Sharma from the division of entomo-logy at the Indian Agricultural Research Institute (iari), New Delhi, have devised a neem-based pest management strategy for cotton crops. They have developed a method to use botanicals (neem) and biopesticides (Bacillus Thuringiensis, Bt) as alternative to synthetic insecticides (Pesticide Research Journal , Vol 9, No 2).

Their findings suggest that the new method can protect cotton against pest attacks and help increase production efficacy. During 1993-94, the resear-chers conducted field experiments on upland cotton (Gossypium Hirsutum L) variety Pusa-31 at the iari.They used eco-friendly pesticides such as neem and Bt alone and in different combinations with synthetic insecticides against bollworm complex (pink and spotted bollworms). At an early stage of plant growth, cotton often attacks from sucking pests, mainly jassid (Amrasca devastans) that affects the plant stand and yield adversely. The researchers conducted regular monitoring of jassid population and applied a protective spray of dimethoate to suppress the population below prescribed economic threshold level (etl). In 1994, jassid population remained below etl and as such control measures against jassid were not taken up.

To evaluate the bio-efficacy of neem products in different insecticidal spray schedules against the bollworm complex, the researchers sprayed five times with a high volume knap-sac sprayer at 50 per cent flowering. A new commercial formulation of neem was tested against bollworms during 1994. The researchers ensured that spraying could be done with utmost care to cover the entire foliage. The spraying was terminated three weeks before picking. As the whitefly (Bemisia tabaci) has emerged as a much sought after pest, because it acts as a vector of the leaf curl virus disease in cotton in the northern cotton growing belt of the country, studies were also undertaken on the population build up of whitefly at different stages of crop growth during the to application of different insecticides.

The researchers found that neem alone or when used alternatively with Bt or with conventional synthetic insecticides failed to check bollworms. However, no build-up in whitefly population was noted. Alternative use of conventional insecticides with synthetic pyrethroid proved as effective as previous treatment in managing bollworm complex without resurgence of whitefly. Further studies showed satisfactory control of bollworms and cotton yield response by alternative use of neem, Bt and a 84 per cent reduced rate of synthetic pyrethroid.

In another such attempt, Nico Orgo Manures, Dakor, Gujarat, is conducting final tests on nicobar - a neem limonoid based stored grain protectant in the form of tablets. According to the company, each tablet contains 10 mg azadirachtin along with other bioactive compounds such as nimbin and nimbidin, and an inert filler material cal-cium carbonate. Five tablets can be used for 50 kg of freshly harvested grain. Due to repellent, antifeedant and growth disruptive actions of nicobar , it is able to control growth of pulse beetles, grain borers, weevils, khapra beetles and many other stored pests. nicobar provides an eco-friendly way of storing food grains like cereals, pulses and oilseeds against pest attack. The new tablets would not only keep grains free from insects, and their cocoons and faeces, but also maintain nutrition qua-lity of the grains with freedom from harmful chemical residues.

Another India-based company, Fortune Bio-Tech Limited has announced that it will export neem-based products early next year. Several financial organisations have extended their helping hands for the project. The Company has planned to export 80 per cent of the production to countries such as the us , Mexico, Spain, Italy, South America, Canada, Thailand, Israel. It will be first in the country to export globally, azadirachtin based botanical pesticides having insect repellent, antifeedant and insect growth regula-tory properties.

These products are easily bio-degradable, cost-effective and eco-friendly which do not leave toxic residues. Azadirachtin will be extracted from neem seeds with the technology provided by Cardiff Chemicals, uk. The company has created facility to process about 20 tonnes of neem seeds a day to be procured from Andhra Pradesh, Tamil Nadu, and Karnataka. Presently, the products of the company are undergoing a variety of tests in the us and the uk . Elaborate arrangements have been made to market the product in India and abroad.

National Tree Growers Cooperative Federation is soon expected to introduce a neem pesticide, called Gronim. The product has been found effective against pests of several food, vegetable and cash crops. Apart from its antifeedant action, the pesticide also affects the reproductive cycle of the pests by delaying the hatching of eggs and wing formulation and other moulting and reproductive abnormalities.