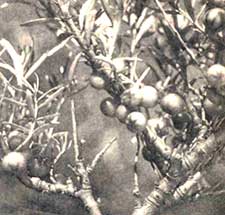 SEABUCKTHORN, a multi-purpose shrub-tree, can improve the lives of millions of marginal farmers living in the Himalayan wastelands. The shrub-tree, found almost all over the Himalaya, has the potential to transform both the economy and the ecology of the region, say scientists at the International Centre for Integrated Mountain Development (ICIMOD) in Kathmandu.

Seabuckthorn (Hippophae) is a deciduous shrub with a well-developed root system and bears juicy orange-like fruits. Its roots not only help to hold soil firmly but also fix nitrogen at almost double the rate of the soyabean plant. Estimates hold that up to 180 kg of nitrogen per ha is fixed in the soil around seabuckthorn forests in a year. A study done by Lu Rongsen of ICIMOD's Mountain Farming Division states that a seabuckthorn plantation can check loss of topsoil due to monsoon rains by more than 70 per cent. It can also retain more than 80 per cent of the water in the soil.

The plant can yield 750 kg to 1,500 kg of berries per ha. The Vitamin C content of the fruit is three to 16 times higher than that of the Kiwi fruit (Actinidia sinensis). The pulp of the seabuckthorn fruit and seed also contains oil which is said to be very important for medicinal purposes.

This fast-growing plant is also a good source of firewood: a six-year-old forest can produce 18 tonnes of firewood per ha, which is equivalent to 12.6 tonnes of coal. Besides this, the plant's leaves and tender branches can be used as fodder.

It is particularly suitable for the degraded Himalayan regions because it can survive at extreme temperatures and soil conditions, according to N S Jodha, an Indian economist at ICIMOD. The shrub has been found at temperatures ranging from 40 C to 43 C and in areas with very little rainfall (300 mm-400 mm).

Seabuckthorn grows in the cold temperate regions of Europe too, but except for the former USSR and China, no country has been able to fully exploit it economically. In 1990, China's total output of seabuckthorn products was more than 150,000 tonnes, valued at US $21.18 million. The Chinese today produce juices, oils, pigments, wines, sweets and candies, shampoos, hair conditioners, hair dyes, beauty creams, vitamins, cough syrups, anti-inflammation drugs and pain-killers from the plant.

Convinced about the plant's usefulness, ICIMOD -- which is an autonomous organisation of scientists from Nepal, India, China, Pakistan, Bhutan, Myanmar, Bangladesh and Afghanistan -- is now urging its member governments to take it seriously. It has already achieved some success. The Nepali Prime Minister's agenda during his recent visit to China included seabuckthorn. India and Pakistan have also evinced interest in the shrub.

The Indian environment ministry has commissioned, through the Himachal Pradesh Science and Technology Council, a study on the shrub in the Kumaon, Garhwal and Kashmir hills. The study is being conducted by Arvind Kumar Bhatt, a scientist who had previously worked for ICIMOD. The plant is called dhurchuck and tarwachuck in Garhwal, chug and swak in Kashmir and tarru and tabru in Ladakh.

Scientists are quite excited about the plant's potential. As Jodha puts it, "Nothing has been done for the people of the Himalayan region because everyone felt the region had no potential, nothing. Now, this is something."