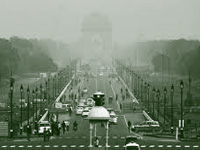 A new study “Air Pollution Challenges for developing megacities like Delhi” published today in the journal Atmospheric Environment has described how Delhi suffers a toxic blend of geography, growth, poor energy sources and unfavourable weather that perpetuates and propagates its dangerously high levels of air pollution.

A team of researchers led by the University of Surrey assessed how Delhi’s landscape, weather, energy consumption culture, and growing urban population combines to elevate concentrations of air pollutants, including ultrafine particles, the most harmful to human health.

“Air pollution has been placed in the top ten health risks faced by human beings globally. Delhi has the dubious accolade of being regularly cited as the most polluted city in the world, with air pollution causing thousands of excess deaths in a year in this growing megacity, explained Dr Prashant Kumar of the University of Surrey.

“ Whilst it might be easy to blame this on increased use of vehicles, industrial production or a growing population, the truth is that Delhi is a toxic pollutant punchbowl with myriad ingredients, all which need addressing in the round.”

Delhi is one of the largest population centres in the world. Classed as the world’s fifth ‘megacity’, it has a population of 25.8 million, which continues to grow. With this growth, our research predicted that the number of road vehicles will increase from 4.7 million in 2010 to nearly 26 million by 2030. Total energy consumption in Delhi has risen 57% from 2001 to 2011.
'Breathability'
As a landlocked megacity Delhi has limited avenues for flushing polluted air out of the city. Coastal megacities such as Mumbai have at least a chance to ‘replace’ polluted air with relatively unpolluted sea breezes, whereas Delhi’s surrounding regions are sometimes even more polluted than the city. For example, most of the brick kilns used for making bricks are not located in the city, but in predominantly upwind surrounding industrial areas.
These outside pollutants can be attributed to use of low-quality fuels such as raw wood, agricultural and plastic waste in industrial settings, cow dung for cooking stoves and widespread use of diesel generators due to unreliable infrastructure. These sources release fine particle pollutants, the most dangerous to human health.
In Delhi fine particle pollution rates are ten times higher than that of Chennai, which has ten times more cars but is coastally located, without the surrounding industrial areas.
Coupled with Delhi’s densely packed architecture, and varying building heights the ‘breathability’ of the city is inhibited by its weather conditions. The city’s decreasing temperature (attributed to the effects of pollution) draws outside polluted air into the city centre, whilst windy, dusty conditions during summer exacerbate this problem.
“The picture of Delhi’s pollution problem is complicated and is aggravated by some factors that are out of human control,” continued Dr Kumar. “However, in this growing city it is important that the population is protected in whatever ways they can be from health-endangering pollutants. Simple remedies such as ‘greening’ unpaved roadside areas through a natural or artificial grass canopy could possibly help in limiting coarse dust particles during dry and windy seasons. Natural measures, such as the development of wetlands and trees are also effective.”
“There is also a cultural context here. Even the best science and technology will not succeed in reducing emissions and improving air quality if it is not considered in a broader framework of economic development of the country, rising awareness of public health risks and a change in attitudes and regulation towards poor quality fuels. It is a complicated, pick-and-mix of problems that will prove difficult to combat without innovative, encompassing and quick action.”
See Study: Air Pollution Challenges for developing megacities like Delhi; Atmospheric Environment; 23 October 2015
http://www.sciencedirect.com/science/article/pii/S1352231015304519