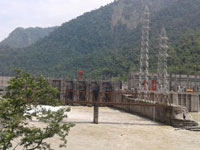 NHPC Limited, India’s premier hydropower company and a ‘Mini Ratna’ Category-I Enterprise of the Government of India has commissioned the 3rd Unit of the 4x40 MW (160MW) Teesta Low Dam–IV hydroelectric power project in Darjeeling District of West Bengal. Speaking on the occasion Shri K.M. Singh, CMD, NHPC said, “I congratulate all NHPC employees and especially those who are associated with TLDP-IV for the successful commissioning of the 3rd Unit of the project that has been achieved through sheer hard work and dedication”. He further added, “I am sure that the project will commission its last 4th unit within a month.” The first two units of TLDP-IV project were commissioned on 14th February 2016 and 31st March 2016 respectively.

The TLDP-IV is a run-of-the-river scheme on River Teesta which will generate 720 Million Units of electricity in a 90% dependable year on commissioning of all its four units. The beneficiary state of this project is West Bengal. It is a run of the river scheme located at about 350 metres upstream of Teesta-Kalikhola confluence on NH-10 near Kalijhora village in the vicinity of West Bengal-Sikkim border. It is the third generating unit commissioned by NHPC and expecting to commission much more units during this calendar year. It is all possible only due to hard work and sincere devotion of NHPC employees towards their work.

NHPC has carried out Environment Impact Assessment (EIA) study for the project to address the impact on land, flora and fauna, water etc. including socio-economic status. Based on EIA, Environment Management Plan had been framed to minimize the expected impact arising due to construction of the project. The measures consist of suitable mitigatory plans viz. catchment area treatment plan, biodiversity conservation plan, compensatory afforestation plan, reservoir rim treatment plan, landscaping and green belt development plan, restoration of muck dumping sites, R&R plan etc. which are required to be implemented during construction phase and safeguarding of implemented plans. The project has also implemented numerous welfare activities under NHPC’s CSR- SD scheme in the vicinity of the project.