No climate for change 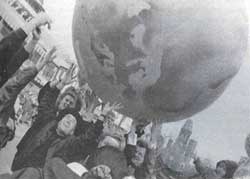 GLORY became India's, albeit in a limited sense, when it carved out a leadership role at the Climate Summit in Berlin. Supported by China, the Indian proposal of a 20 per cent cut in carbon dioxide (CO2) emissions of the industrialised countries by the year 2005 -- a revised form of the earlier Alliance of Small Island States (AOSIS) draft protocol -- broke the deadlock created by the American strategy of blocking the negotiations on specific cuts on emissions, and the deadline.

The Indian stand was based on the pragmatic concern that the reduction in emissions must be initiated by the industrialised countries to provide the necessary space for the developing countries to increase their emissions. The 1st meeting of the Conference of the Parties (COP) opened in Berlin on March 28, to establish a fundamental basis to implement the United Nations Framework Convention on Climate Change (UNFCCC) signed by 153 nations at the Earth Summit in June 1992. The 10-day Climate Summit discussed substantive issues, such as the Adequacy of Commitments, Joint Implementation (JI) and the Financial Mechanism.

The industrialised countries (ICS) are mandated by the fccc to reduce their CO2 emissions to 1990 levels by ad 2000. However, the national reports filed to date by the ics to the Interim Secretariat (IS) on Climate Change reveal that they are actually increasing their emissions by an average of 16 per cent annually.

Prior to the summit, Trinidad and Tobago, on behalf of the AOSIS, had submitted a draft protocol to the Interim Secretariat. Haunted by the spectre of sea-level rise and submergence, the small island states highlighted the ominous truth that the existing commitments of the ics were grossly inadequate to meet the objectives of the convention.

In political terms, even the 20 per cent CO2 reduction demanded by AOSIS is considered ambitious, yet, it is just not enough in terms of what is needed to avoid the expected climate change damage. The Intergovernmental Panel on Climate Change (IPCC) which provides scientific inputs to the policy-makers, predicts that 60 per cent cuts in greenhouse gas emissions from the 1990 levels are needed to stabilise our climate and prevent global warming.

But the aosis draft protocol failed to generate any enthusiastic support from among the G-77 countries. It was stumped by the German proposal, made in the same context, which sought to create a separate category of the more developed among the developing countries, such as China, India, Brazil and others, and committing them to reductions in the emission of greenhouse gases. The German proposal envisaged working "towards balanced commitments on the part of industrialised and developing countries, for example, by means of further reporting the commitments for non-Annex I parties and commitments to limit the rise in emissions in the case of certain more advanced developing countries."

That the ics should shoulder the main responsibility for the current climate problems, and, therefore, lead the rest in cutting emissions, was reiterated by India's minister of environment and forests, Kamal Nath. In a letter, on the eve of the Berlin meet, to the leaders of both, industrialised and developing countries, Kamal Nath asserted that the "developing countries have no -- or indeed negative -- responsibility for causing global warming."

To the extent that the Convention specifically requires, under Article 4(2)(b), a review of the adequacy of the commitments undertaken by the developed-country Parties and the industrialised East European countries (called Annex I Parties), the German gameplan only served as a diversionary tactic to ward off the potential criticism of their commitments. In the absence of legally binding targets and timetables, the Convention fell short of being an effective instrument for combating climate change.

The G-77 agreed to support a working group to negotiate a cop mandate based on the elements of the revised protocol as presented by India. As a 1st priority, the working group will aim to set specific, legally binding targets for the reduction of CO2 and other greenhouse gas emissions by the ICS.

However, at the conclusion of the summit, all that emerged was a weak and vague agreement: the nearly 130 participating nations agreed to work towards a protocol by 1997, which would set legally binding targets in time for the 3rd climate summit to be held in Japan. On the issue of the JI, countries like China and India made a major concession, and perhaps took a risky path, by agreeing to a 5-year pilot phase programme. The ji pilot phase will, however, present an immense challenge to climate negotiators, as the mechanism and modalities for the sharing of credits for emission reductions is yet to be established.