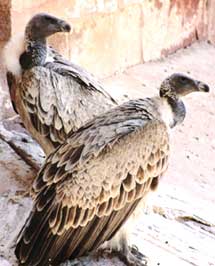 experts advocate the use of a new drug meloxicam to save the dwindling number of white-backed vultures, a rare South Asian variety. Many of them reckon nearly 95 per cent of these birds have gone missing after the anti-inflamatory drug diclofenac was introduced in 1994.

The drug is prescribed to an estimated five million cattle in the subcontinent every year. The birds feed on cattle carcasses and thereby accumulate uric acid, which causes fatal kidney damage and gout in them. However, vultures that fed on meloxicam remained healthy and their blood did not show uric acid poisoning, says a study reported in the medical journal PLoS Biology.

Both diclofenac and meloxicam are out of patent but it was the former's patent that ran out first. So diclofenac, with a lower price, was predominant in the market. Conservationists have repeatedly asked for a ban on diclofenac and for policies that favour meloxicam. And in fact, the Union government did decide to ban the drug by September 2005. But this ban is yet to take effect. Experts allege this is because of pressure from the pharmaceutical industry. Wildlife policy makers are slated to meet in March 2006 to deliberate on this issue.