But not everything is for seduction alone 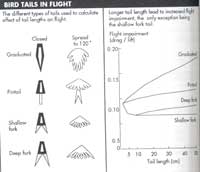 NOT ALL scientists go along with Darwin's view that male birds evolved long tails for purposes of sexual selection. A group of British zoologists suggests the long tails may have evolved as a result of natural selection, making them a fitter species. They say the long tails are not mere seductive devices to turn on sexually fastidious females.

The scientists studied long tails with four characteristics: graduated, pintail, shallow-forked and deep-forked. They found shallow-forked tails make for smoother flight and are not a trait that is uniquely male. On the other hand, the other characteristics impair flight and are male-specific. The Cambridge group used a combination of aerodynamic models and comparative data from more than 600 museum samples of bird tails to examine the "aerodynamic cost" of tail elongation -- the maximum tail length beyond which flight is impeded.

They found that long, forked tails can improve flight efficiency depending on the depth and how widely the tails are spread while in flight. Hence, such tails may have evolved through natural rather than sexual selection. They also argue that even when long tails impede flight, but are preferred by choosy females, it's unclear how such preferences evolved, especially as the female gains no direct benefit from its choice of a mate.

The zoologists say the deeper the long, forked tails are, the more likely they are to hinder flight than shallow, forked tails. Therefore, sexual selection could better explain their evolution than natural selection.