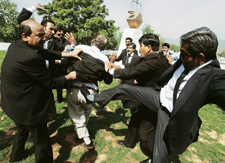 pakistan president Pervez Musharraf recently suspended chief justice Iftikhar Muhammad Chaudhry on allegations of misconduct and misuse of authority. Lawyers, opposition parties, human rights activists and some judges condemned the suspension effected on March 6, 2007, calling it unconstitutional and a blow to the independence of the judiciary. The Supreme Judicial Council, which oversees the judiciary, is to look into the matter. Chaudhry was known for his firm stance on government actions and human rights abuses.

Chaudhry recently held back the sale of Pakistan's state-run Pakistan Steel Mills Corporation. Earlier, he had taken suo motu notice of a petition by the Human Rights Commission (hrc) of Pakistan to recover missing persons, allegedly abducted by the country's intelligence agency, the Inter Services Intelligence.

On August 8, 2006, a nine-member bench of the Supreme Court of Pakistan, led by Chaudhry, had asked the Privatisation Commission to explain its process for identifying a viable, profit-making unit like the Pakistan Steel Mills Corporation for privatisation. The court's orders came in response to a petition by the Pakistan Steel People's Workers Union.

The steel mill, situated some 30 km southeast of Karachi, is the largest industrial unit of Pakistan with an annual production capacity of 1.1 million tonnes. Built with assistance from the erstwhile Soviet Union after the us had refused to help, the unit was regarded as a symbol of Pakistani self-reliance. More importantly, it also fulfilled the country's defence requirements.

The unit was sold to Tawairqi Steel Mills (a Saudi Arabian company), Magni Togorsk Iron and Steel (a Russian enterprise) and Arif Habib Securities of Pakistan on May 29, 2006 for Pakistani Rs 21.68 billion (about us$357 million) but the court put a stop to the transfer of possessions till June 15, 2006, responding to allegations that Pakistan's biggest industrial unit was being sold at a throwaway price. The court's decision did not please the government since it was eager to retire massive foreign debt through the sale.

Another decision that did not find favour with the government was Chaudhry took suo motu notice of the disappearance of thousands of people in the wake of a crackdown on fundamentalist elements in troubled South Waziristan in the North West Frontier Province, bordering Afghanistan, and nationalist forces in Balochistan, bordering Iran and Afghanistan.

Musharraf, however, denied that the government was involved in the disappearance of people in any way.