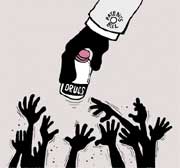 the Patents (Amendment) Bill 1999, which was passed recently by the Indian Parliament, seems to have left a number of questions unanswered. Many Parliamentarians, social activists and scientists have voiced their concern over the fallout of this Bill. They have accused the government of ignoring the interests of the nation in the patent regime. Some feel the Bill will lead to an unprecedented escalation of drug prices, thereby affecting the poor people's access to vital medicines.

However, during a debate on the Bill in Parliament, Sikander Bakht, the Union minister for industry, set aside these apprehensions and assured that the Indian Industry would be given sufficient time to gear up to competition from foreign companies. Meanwhile, the Research Foundation for Science, Technology & Ecology ( rfst&e ), a New Delhi-based non-governmental organisation, has decided to file a public interest litigation ( pil ) against the Bill in the Supreme Court.

The present legislation provides for the creation of a mailbox facility for product patents during the transitional period till the new patents regime comes into effect and also gives exclusive marketing rights ( emr ) to foreign manufacturers of pharmaceuticals and agricultural chemicals.

Under emr , a patent-like mechanism during the transitional period, the Indian patent office has to allow emr of a company of any member country, without even examining the patentability of the product. emr will be given to only those drugs that are patented after January 1, 1995