Profit and loss in a market economy 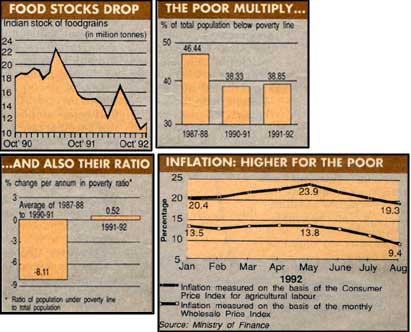 AS INDIA plodded along the road. to world market integration, structural reforms initiated in 1991 resulted in the government's near- total dependence on market forces for price corrections.

A study by S P Gupta, research director at the New Delhi-based Indian Council for Research on International Economic Relations, indicates growth in real, per capita private consumption averaged 3.1 per cent per annum between 1988-89 and 1990-91, but declined to 0.56 per cent in 1991-92. National Sample Survey data revealed that, taking into account the population increase of nearly 2 per cent per annum, the poor increased by nearly 10.7 million, compared to an average annual decline of nearly 15.5 million between 1987-88 and 1990-91.

Gupta's conclusions are dismissed by Rajiv Kumar, economic adviser in the ministry of finance, who stresses the reforms are pro-poor and contends, "We have opened up the economy further, removed foreign exchange controls, lowered the tariff to 1~0 per cent this year, delicensed the industrial sector, removed reservations and geared up the public sector to become more efficient. " Kumar believes government policies will also lead to greater environmental conservation, saying, " As we move to greater rationality in the use of energy and natural resources, people will be forced to conserve."

Pronab Sen, economic adviser in the department of electronics, asserts reforms are necessary , but adds, "The small-scale sector has been hit badly and employment has fallen. Inflation, taken over a longer period, remains at the double-digit level (10 to 12 per cent), while that of essential commodities remains nearly twice that of everything else (around 22 to 24 per cent)."

The trend in consumer prices continues to be disturbing. During August, even when inflation measured by changes in the Wholesale Price Index had come down to single-digit level, the Consumer Price Indexes for both industrial workers and agricultural labourers remained at double-digit levels (11.5 per cent and 19 per cent, respectively).