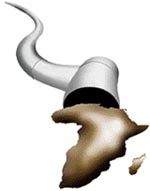 The World Bank (wb) has cleared the construction of a 1,045-kilometre oil pipeline from Chad in central Africa to Cameroon's Atlantic coast. The move flies in the face of environmental concerns raised by experts. The us $3.7 billion project includes the development of 300 oil wells in the Doba Basin of southern Chad by a consortium of oil companies headed by ExxonMobil corporation. The wb will provide more than us $200 million to build the pipeline. Even though us $2.5 billion could be earned through oil revenues over the next 30 years by the pipeline construction, the activists fear that oil spills may contaminate groundwater. It is also felt that the upgradation of existing seasonal roads could lead to illegal poaching and logging in many areas. Besides, the residents living in the vicinity of three oil fields of the Doba petroleum project say that their rights and interests are likely to be directly harmed. Environmentalists argue that there is no guarantee that profits from the pipeline will be invested in projects aimed at development or poverty alleviation in the region.