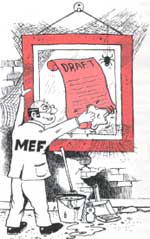 the ministry of environment and forests (mef) has redrafted the legislation on regulating access to India's biological wealth. The redrafted version has been sent to chief ministers of all states for their comments. Former environment minister Saifuddin Soz had earlier finalised a draft, which was to be tabled in Parliament. However, the present government has made some amendments.

Suresh Prabhu, Union minister for environment and forests, said that the legislation seeks to form a National Biodiversity Authority with state boards in order to monitor access to genetic material by foreign companies or nationals. According to the environment minister, the government is making attempts to document the scope of indigenous knowledge related to biological resources. All these attempts can only be successful if the legislation is approved by Parliament.

The draft has been formulated in order to check the piracy of Indian medicinal plants and microbes. Ecologists, however, find several drawbacks in the legislation. They say that while the draft has provisions to regulate access to India's biological wealth to foreign nationals/agencies, it does not have any provision on regulating such access to Indian nationals.