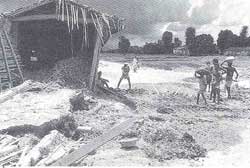 AFTER flooding in the Mississippi valley in central USA took a heavy toll in lives and property damage recently, a poll asked whether "the floods are an indication of God's judgement on the people of the United States for their sinful ways?" Of the respondents, 18 per cent answered affirmatively. If that is indeed the case, God has always been angry with the people of the Indian subcontinent.

"Bodies of people reported missing from the hills have been found hundreds of kilometres south in the plains," says Nepalese home minister Sher Bahadur Deupa. Rescue workers had not reached some of Sarlahi district's marooned southern villages two weeks after the flooding.

Flash floods washed away bridges on the two highways connecting the Nepalese Capital with the plains. This has forced the Kathmandu authorities to airlift fuel and ration petroleum products. But fruit and vegetables, normally trucked in from the Terai plains, have virtually disappeared from the market.
Power generation hit The floods and landslides did not spare the country's electricity supply. Eighty km south of Kathmandu, a small, seasonal stream flooded and damaged two power projects, cutting the country's electricity production by half. Power officials estimate it will cost about $10 million and take at least nine months to repair the damage.

A meteorological department official conceded the lack of adequate weather forecasting and early warning systems, but maintained, "Even with up-to-date forecasting, we would not have had enough time to warn people of flash floods in the hills. The water rushes down too fast."