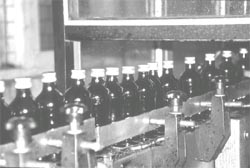 with the advent of a new technology to remove chloroform, it has now become possible to clean and reuse the wastewater from pharmaceutical plants. Called the Purolite adsorbant technology, it removes chlorinated solvents from wastewater streams. Not only does it prevent the release of possibly dangerous wastes but can also lead to significant savings. Guzina, a uk -based firm, has developed this technique to save costs up to us $170,000 for its pharmaceuticals client in the first year of operation in both chloroform reduction and waste management. The unit has cleared all environmental authority inspections and no environmental incidents were reported.

Guzina's unit uses the Macronet 200 adsorbent, which ensures that virtually all chloroform is removed from the wastewater of a pharmaceutical plant. It is then recovered, cleansed and reused. Purolite's Macronet 200 ion exchange resins form the core of Guzina's unit. The hypersol Macronet has higher proportions of micropores than traditional synthetic adsorbents. Micropores provide rapid access to the internal surfaces. As Macronet is hydrophobic, it is suitable for the removal of hydrophobic substances like aromatic compounds from the aqueous systems.

The process was developed in three stages. Firstly, a theoretical study was carried out by Guzina to look for various ways to remove chloroform. Adsorptive resins were found to possess the ability to recover chloroform through steam stripping at temperatures around 100