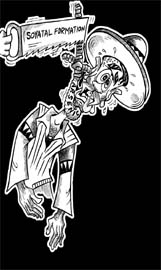 the inhabitants of Zimapan, a district in Mexico, consume water contaminated with arsenic (as), a poisonous chemical. But, a remedy may be locally available to remove the contamination.

About half of the water supply samples tested by Mexico's National Water Commission in the region contained arsenic concentrations above current World Health Organisation limit of 0.01 milligramme per liter of water. Zimapan lies 200 kilometres north of Mexico City and is a mining district famous for its lead, silver and zinc ores. But, these naturally found chemicals contaminate the water supplies and also pollute the groundwater due to leaching from the mines.

The leachates have been found to have a s concentration of almost 16 gramme per litre and high acidity with ph as low as two. The lower the p h level greater is the acidic nature of the chemical tested.

In a region where 72 per cent of the population has been recorded to earn less than us $3.00 per day in 1994, commercial