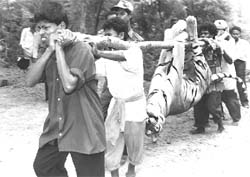 nandankanan, immortalised as a symbol of life and love in Oriya literature and movie songs, stinks of death. On July 5th, this zoological park, situated on the outskirts of Bhubaneshwar, Orissa, became the cremation site for 12 Royal Bengal tigers, which died after contracting tripanosomiasis , a parasitic infection. The dead include eight rare white tigers. Six others are still in a critical condition. The epidemic often strikes the animal population, "but never on this scale," says Saroj Patnaik, Principal Chief Conservator of Orissa (wildlife). The park houses the world's largest number of white tigers.

Before the infection could be pronounced as the real killer, there was a controversy over the real reason of the deaths and doubts existed over the scientific management of the zoological park. While the forest officials claim that the cause of death is the infection, a section of zoo officials say it is more to do with the injection Berenyl given to curb the infection. But the moot question is: how did the animals pick up the infection in the first place, and why was the preventive injection administered after the infection had spread?

On June 23, a white tiger died of the infection but that, strangely, failed to arouse the park officials sufficiently to take preventive steps. Officials say that for two days after the tiger's death, health officials surveyed the tiger population. Nothing constructive emerged from the survey till the infection was again detected in another tiger on July 2. The animal was then administered the Berenyl injection. This was followed by a spree of injections given to 16 tigers the next day. On July 4, the first tiger to be injected died. The other 10 tigers died within the next 24 hours.

The main controversy surrounds the lacklustre efforts of the veterinary officials to diagnose the disease. The drug was given without taking blood samples of the tigers. Experts explain that such a drug should be given only after an accurate diagnosis. Some even claim that Berenyl is a strong, preventive medicine. In fact, John Lewis of the International Zoo Veterinary Group says that it is a toxic drug. When a high dose of the drug is administered, it could lead to anaemia and shock.

An official of the Wildlife Protection Society of India claims that the deaths resulted from a reaction to the drug. The official claims that it was "pure negligence and mismanagement of the veterinary officials" and that Berenyl is strong and an overdose could prove fatal. "Before a dog is given the drug, it is first given a saline drip, then an antibiotic."

Veterinary doctors say that Tranquin, the prescribed medicine for the infection, is expensive and not available with the zoo. The 16 tigers were given the injection without being fed, a fact which is denied by the zookeepers. Wildlife experts put the blame on the zoo officials for their ignorance and insensitive attitude.

"The zoo authorities should have sought immediate expert advice from outside the state and abroad instead of relying on the local doctors," says Biswajit Mohanty, secretary of the Wildlife Society of Orissa. The authority is being criticised as it failed to learn from past experiences: in 1996 the same infection killed a tiger in the park. However, S C Sharma, Additional Inspector General of Forests (Wildlife) says, "this is a tropical disease, not common in many western countries." He mentioned, "foreign veterinarians proposed conditions that are not achievable in India."

P K Sen, director, Project Tiger, says: "there should be a good review of the management policies of the zoo." He also spoke about the need for a review on the type of animals to be kept in captivity.

However, officials at the Convention on International Trade in Endangered Species office in Delhi, were quick to say that the death is solely due to inbreeding, particularly among the white tigers, which leads to genetic disorders. The official also stated: "A team of us scientists visited the park in 1985 and predicted mass deaths due to inbreeding." But experts at the Wildlife Trust of India, speaking on conditions of anonymity, counter this saying inbreeding cannot be the cause of the deaths. He also points out the lack of science in the park's management. "Nine of the dead tigers were in a single enclosure," he says, adding that tigers are not sociable animals and the enclosure was not large enough to hold so many tigers. Fewer deaths took place in the enclosures which accommodated less tigers. He also called for a scientific probe into the incident.

A team of six experts has been set up to look into the matter.