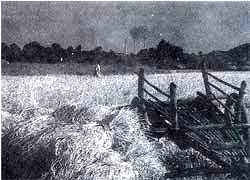 LONG BEFORE Indians run out of land or air, they will run out of water -- unless, of course, they learn to make judicious use of this precious resource. The Mayurakshi river basin in West Bengal and the Sabarmati basin in Gujarat represent some of the serious problems water resource managers face.

The Mayurakshi project, which covers more than one-fifth of the total irrigated area of West Bengal, has been unable to meet the growing water demand in the last decade. More water is needed to irrigate the increased area under summer rice and to accommodate the changing crop patterns, after which the project has little water left to meet the new municipal and industrial requirements such as the 67 cusecs required (daily? annually?) by the Bakreshwar thermal power project. This has led to demands to enhance the capacity of the reservoirs in the basin.

The Sabarmati project, on the other hand, is reportedly one of the few projects in the country that mops up almost the entire water available for storage in its 21,674 sq km basin. Yet, the command area faces acute water shortage almost every year because of heavy municipal and industrial demands coupled with the ever-increasing irrigation requirements of Mehsana, Ahmedabad, Sabarkantha and Banaskantha districts. Insufficient water has led to feverish exploitation of groundwater in the basin. Consequently, parts of the basin today witness groundwater depletion of as much as four metres in a single year.

The Sabarmati and Mayurakshi basins are not the only areas in India where water is running out. As M S Reddy, chairperson of the Central Water Commission (CWC), puts it, the problems before Mayurakshi and Sabarmati may already be acute, but more and more irrigation systems in the country are going to be forced to deal with the critical issue of resource management in the face of increasing demand.

Widespread problem
It was in this context that irrigation experts met at the first national workshop held in New Delhi in September to draw an action plan for optimum utilisation of the country's water resources. The action plan is to be drawn up on the basis of pilot studies of these two river basins, which will be jointly taken up by the state governments concerned, the Water and Power Consultancy Services and the CWC. The UNDP is expected to provide $8 million for the project.

But the two-day workshop drew a mixed response from the participants. While the efforts to improve water use through pilot studies at the basin level were welcomed, several participants felt the workshop failed to suggest new ways to rationalise water use.

The disappointment was summarised by R N Dey, director of the Central Design Organisation in West Bengal, who said the workshop had failed to go beyond the recommendations of the second Irrigation Commission of 1972 and some state level committees, which had recommended measures such as lining of canals, conjunctive use of surface and ground water, better communications in delivery systems and improved crop planning. According to D N Kulkarni, secretary in the Maharashtra irrigation department, concerns like sustainable water use and user participation in management of water resources took a back-seat in the workshop.

UNDP's technical adviser A Fillotti complained the participation had been limited to the problems of reservoir maintenance and water delivery as there was little effort to understand the ecology of the river basin and place the problem within its specific context. Fillotti expressed shock that no participant had chosen to take up issues like pricing of water, priority of use and the environmental fallouts of irrigation.