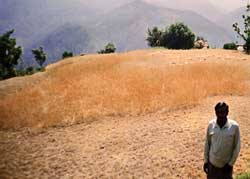 The Uttaranchal government has declared 56 of the state's 78 tehsil s drought-hit. A Union government team recently noted that more than 50 per cent of the rabi crop in Nainital district has been affected. The state government has responded with an aid package of Rs 33 crore. But experts doubt if the situation warrants this measure. Poor performance of agriculture has more to do with the collapse of water-harvesting techniques, they say.

"This year Uttaranchal received barely 3 cm of winter rainfall; it usually receives 13 cm. But drought-like conditions exist only in the uplands,' says Raghubir Chand, professor of geography, Kumaon University, Nainital. "The drought declaration is not based on scientific assessment of agriculture in the uplands and in the valleys,' he adds.

Rain-fed upland agriculture is very different from valley agriculture, which relies on irrigation canals, gul s and nahars. The uplands have faced the brunt of the rainfall deficit. Residents of Okhalkanda Malli