Sinking and with a trace! 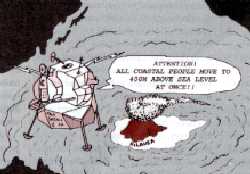 it could be the splash of the century and with disastrous results. The Kilauea volcano in Hawaii - 20 km long, 10 km wide and 9 km deep - is sinking into the Pacific Ocean at 7 cm a second. The volcano, one of the most active in the world, is causing consternation among geologists as there is a possibility that its sin-king could unleash a gigantic tsunami, a wave up to 300 m high, which could ruin coastlines around the Pacific from California to Australia, with catastrophic consequences.

Tsunamis have occurred in the Pacific in the past 100,000 years. Geologists, using sonar images of the ocean, have found deposits of crushed coral, pumice stone and debris up to 300 m above sea level in Hawaii, Australia and New Zealand - a result of a tsunami. The images also show landslides of hundreds of sq km of rock below the ocean.

us geologists have descended in large numbers with high-tech equipment, including the global positioning system, to monitor the moving Kilauea. Paul Segall and colleagues of the Stanford University in California, have set up camp since 1990 to monitor the volcano. Their interest primarily lies in looking for the characteristic swelling of the ground that precedes a volcanic eruption, as magma (molten rock) flows in.

According to Segall, on January 30 this year, "The long-lived Pu'u O'o vent, which had been active for 14 years, stopped erupting and a new fissure opened. We saw the volcano widening for about eight hours beforehand. The flanks separated by 26 cm before they split." This was accompanied by low-frequency vibrations of the ground, at about one hz, as the magma moved. It is yet to be ascertained if these underground changes increase or decrease the chances of the volcano slumping.

A giant tsunami, if generated, would take only 20 minutes to sweep through Hawaii. It would then race across the Pacific at the speed of a jumbo jet, wreaking havoc in other coastal cities. Japan and Australia would have several hours of warning and this could help them partially evacuate the low-lying areas. But the wave could still result in great loss of life and destruction to property.

Geologists are of the opinion that emergency warnings should be worded in such a way so as to create a sense of urgency among people. The last earthquake-induced tsunami, which hit Hilo in Hawaii in 1960, resulted in more deaths as people came to the seaside to see the spectacular wave and with tragic results. While most of the threat pertains to the Pacific, other oceans could also be at risk, feel geologists.