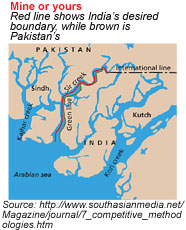 there is some relief in sight for fisherfolk from India and Pakistan who frequently get nabbed by the border security when they wander into the territorial waters of the other country. India and Pakistan have initiated a joint survey of the disputed maritime zone, Sir Creek, in the Rann of Kutch marshlands.

Started in January 2007, the Indo-Pak survey is expected to end by March 15. At present, a team of hydrographers from Pakistan, led by major general Jamil-ur-Rehman Afridi, the surveyor general of Pakistan and their Indian counterparts led by rear admiral B R Rao, India's chief naval hydrographer, are busy mapping the disputed area.

A Pakistan foreign office official claimed the joint survey was a sign that the situation in the area was improving. Officials at the Maritime Security Agency (msa), which monitors the territorial waters of Pakistan, also looked enthusiastic. "We warn the straying fisherfolk through loudspeakers but are compelled to apprehend them once they intrude in our territorial waters. But since the establishment of a hotline between msa and the Indian Navy, arrests have declined,' said an msa official requesting anonymity.

"Of the 59 boats that were seized and 365 Indian fisherfolk caught by msa in 2006, only six boats were seized in December 2006, and none were captured in January 2007,' said the official. "This data does take into account the fact that most cases of intrusion and seizure of boats that we receive are between the months of September and March, when the sea remains relatively calm,' he added.

Meanwhile, pff has demanded a visible demarcation of the border at Sir Creek and proposed a fishing zone of 50 nautical miles on either side of the border in which both Pakistan and Indian fisherfolk could fish without any hindrance. It also demanded that the representative fisherfolk bodies of both countries be informed in case of arrests or seizures in either country.

However, it might be quite some time before the two neighbours reach a consensus over Sir Creek as much of the disputed region is said to be rich in oil and gas. And control over the creek would have a huge bearing on the energy potential of each nation.