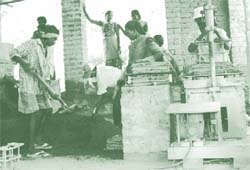 bricks make homes, but brick kilns contribute to pollution. Though many states in India have regulations in place, the growing demand for bricks is increasing pollution. Fly ash is a byproduct of all coal-based power plants. In fact, India produces about 75-80 million tonnes of fly ash every year. A figure projected to increase to 100 million tonnes in the next two to three years.

Fly ash is a pollutant, having sulphur content as well as silica and aluminium. It is airborne, as the particles are fine. The Union ministry of environment and forests has made it mandatory for all brick kilns within a radius of 50 km of any lignite or coal-based thermal power plant to use fly ash in their bricks. No excise duty is levied on production of such bricks. Deepak Gahlowt, editor of the Construction Journal of India , says, "The raw material is available. So is the technology. And government regulations are in place.'

There are many ways of producing bricks using fly ash. For example, Bilt Infrastructure uses an efficient method to produce bricks and slabs at its Faridabad plant in Haryana, with autoclave technology to steam-cure bricks. The bricks provide certain structural advantages over the usual burnt bricks. The density of the these bricks is only one-third of the bricks produced by the brick kilns and one-fourth of that of the reinforced concrete cement used for building construction.

This helps save the cost on structural support needed for dead weight in multi-story buildings as fewer beams and support columns are used. Also, the strength to weight ratios is greater for autoclave treated fly ash bricks. Consequently, pre-fabricated structures using fly ash bricks can replace not only the burnt bricks but also the concrete slabs used for floors and ceilings.

Fly ash bricks are an architectural marvel in some ways. But more than that, the use of these bricks helps conserve the environment. The burnt brick kilns are made of mud. This mud comes from prime agricultural land. The process starts with removal of at least 90 centimetre of fertile topsoil from leased agricultural land near the kiln. The fertility of the particular piece of land is lost for years. Across the road to the Bilt Infrastructure factory, in Faridabad resides Rati Ram, a farmer in Aurangabad village of Faridabad, who has leased his land to a brick kiln owner. He says, "I can't grow anything on the land for a good number of years after the excavation of mud. I needed the quick money and so had to lease the land.' In fact, the area around the kiln chimney gets burnt due to the high temperature and, at times, a decade passes before anything can grow on it. Heat convection is lateral, the damage, therefore, is extensive.

The soot from the chimneys is damaging for the plants growing in the vicinity. Tejvir Singh, resident of Aurangabad, refuses to give his fertile land to any of the six kiln owners in his village, saying, "I don't like to eat fruit growing in my own village. The smoke bellowing from the chimney damages it all.'

The trouble with brick kilns doesn't stop here. Usually reinforced concrete cement is used to plaster the brick walls. The process is highly water-intensive. The shortfall of bricks due to housing demand is pegged at 50,000 million bricks for the period 1997-2002. It makes one wonder about the amount of fertile topsoil that will be eroded, amount of water consumed and damage done to the environment before alternatives like the autoclave treated fly ash bricks are brought into regular use. "As of today,' says Gahlowt, "one can count the number of buildings using fly ash bricks on ones hands.'