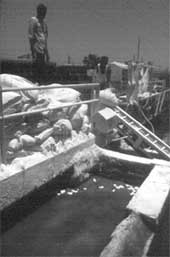 on january 6, the Gujarat High Court (ghc) formulated a plan to set up an environment audit scheme to tackle the menace of pollution in the state. The proposed audits would be conducted by the Gujarat pollution control board (gpcb) and would primarily apply to two categories of effluent discharging units. The ghc order asked units at Naroda, Odhav, Narol and Vatva estates to shut down industrial activities with effect from February 1, for polluting the environment and also criticised the gpcb for not taking actions against errant units in the state.

The ghc bench comprising justices C K Thakkar and M S Shah, ordered that electricity connection and water supply to all such units be discontinued by February 10 and urged the state government and the gpcb to prepare the format of environment audit reports by February 15.

The two categories of industries falling within the proposed audit's ambit are textile units having a daily discharge of one lakh litre of effluent per day and stainless steel rolling mills, and the chemical industry. Of these, the chemical industry, especially, chlorine-based and chlorine producing units, is particularly detrimental to health and the environment. Organochlorines are difficult to break down either in the environment or in the living tissue, the resultant products being more toxic.

For quite some time, Greenpeace International has been following the alarming rate of expansion of industries that use organochlorines in developing countries like India, China and Latin America. As part of its global campaign for gradually phasing out organochlorines