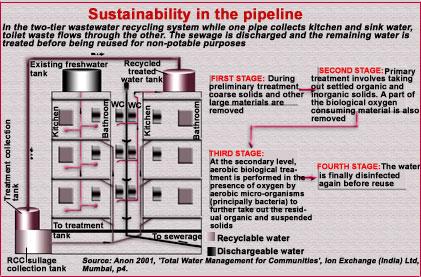 WHEN the Union ministry of urban affairs and poverty alleviation issued a notification on July 28, 2001, making rainwater harvesting mandatory in Delhi, it had inserted another clause that went largely unnoticed: a stipulation that all structures discharging 10,000 litres and above should incorporate wastewater recycling for horticultural purposes. Though this regulation is binding on only upcoming buildings and not the existing urban sprawl, yet it can go a long way in helping the capital tide over its water woes. Provided the civic bodies - the Delhi Development Authority (DDA) and Municipal Corporation of Delhi (MCD) - effectively implement the by-law.

The severity and the immediacy of the crisis that is facing Delhi can be gauged from the fact that the water table has plummeted to 20 metres in some areas. The National Capital Region Planning Board's gloomy prognostication that in two years nearly 40 per cent of the city's population would have difficulty in accessing water, and the yawning demand-supply gap (794.25 million litres per day at last count) are other pointers to the grim situation.

Delhi is desperately looking to neighbouring states such as Punjab, Himachal Pradesh and Uttaranchal to make up for this shortfall. But these are long-term proposals that may yield too little, too late. In this context, managing the existing sources of water to meet the burgeoning demand appears to be the only viable option. This is where wastewater recycling, in tandem with rainwater harvesting, figures in.

By conserving freshwater for drinking and washing purposes and recycling wastewater for non-potable uses, the city can address the issue to a large extent. According to the Indian National Trust for Art and Cultural Heritage (INTACH), an organisation advocating wastewater recycling for Delhi, water harvesting and recycling in the capital would yield 675 million litres per day (MLD) and 2205 MLD, respectively. This quantity is more than sufficient to close the projected demand-supply gap. Ironically, even as harvesting has caught the people's attention through its concept of recharging groundwater with freshwater, there is not much awareness about wastewater recycling.

Mechanics of the process
Contrary to popular belief, recycling is a tried and tested method. Its technology for domestic units is readily available in the market. "A two-tier structure, comprising parallel piping systems (see diagram: Sustainability in the pipeline), is ideal for new buildings," reveals Sanjay Chopra, divisional manager (marketing), Ion Exchange, a Mumbai-based water treatment company. "While one system collects sullage from the kitchen and sinks (grey water), the other takes in sewage or toilet waste (black water). The sullage is treated and used, and the sewage is discharged," he adds. This system has been successfully tested in Mumbai and Pune in Maharashtra.

Another method that is in use involves plant-based treatment of wastewater. Here, wastewater is filtered through a bed of plants. "The only drawback of this system is that it requires space and acquiring land in Delhi is an expensive proposition," says Manu Bhatnagar, an advisor in INTACH.

One reason why wastewater recycling has not been explored in the capital is because of its perceived high costs. Exploding this myth, Bhatnagar says: "In the parallel piping system the operational cost works out to just Rs 1.25 per kilolitre, and at 50 paise plant-based treatment proves even more economical. Considering the fact that treated water is available for Rs 5-6 per kilolitre, recycling is the most feasible solution."

Capital gains
Recycled wastewater can become an additional source of water for non-drinkable uses such as in gardening, construction, car washing, toilet flushing and in scenic waters and fountains, thereby reducing the pressure on freshwater supplies. Reusing wastewater also means cleaner rivers. At present, Delhi generates 2871 MLD of wastewater as against the treatment capacity of 1478 MLD. The remaining 1393 MLD (48 per cent) finds its way into Yamuna river.

"Eighty per cent of used water comes back as discharge. Therefore, in a household comprising five members 400 litres can be recycled for non-potable purposes (if 100 litres per capita per day is being used)," avers G C Nandwani, chief engineer, Delhi Jal Board (DJB), the agency that supplies water in the capital. Moreover unlike rainwater harvesting, wastewater can be recycled round the year.

Some institutions in Delhi are already practising this method to generate water for non-potable purposes. Hyatt Regency, a five-star hotel, is recycling its laundry and kitchen wastewater for gardening. Other buildings such as the Imperial hotel in Janpath, the Maurya Sheraton in Diplomatic Enclave and Netaji Subhash Institute of Technology in Dwarka are also recycling their wastewater for horticultural purposes. And the India Habitat Centre (IHC) is set to follow suit.

Civic cesspool
On paper, the wastewater recycling by-law seems potent enough to ensure that the people of Delhi are not left high and dry. But whether it will be enforced stringently is quite another matter. In fact, there are plenty of precedents to suggest that the regulation may not get off the ground.

MCD additional commissioner Vishnu Sharma, however, exudes confidence. "If by-laws are violated during the construction of a building, we do not issue the certificate which is necessary to get water and electricity supply. Without this document, the structure is deemed to be an unauthorised construction and punitive action (such as demolition or sealing of building) can be taken," explains Sharma. In the year 2000-2001, MCD sanctioned 4010 building plans out of which only 100 received this certificate, he adds. For all his optimism, Sharma is not even aware that wastewater recycling is not mandatory for existing buildings. When asked about the provisions governing standing buildings, the official appeared confused. "I do not know the details, but I think something already exists," he said.

Subhir Paul, a senior architect and environment planner, is sceptical. "Like the rest of the rules, even the recycling clause will be openly violated and the municipal authorities will do nothing about it," he laments. Bhatnagar concurs: "The building departments (DDA and MCD) are not laying emphasis on the rainwater harvesting and wastewater recycling provisions." Sharma denies these allegations.

Although some building plans with recycling provisions have been cleared, none of the structures has been completed as yet. "The clause is only a year old and the buildings sanctioned thereafter will come up in two to five years, which is when we can judge the implementation aspect," says Anil Barai, director, buildings, DDA.

To rid Delhiites of water shortages such provisions need to be introduced in existing structures as well. However, Nandwani feels that people cannot be forced to adopt such practices. "Although a dual-piping system can be retrofitted, it involves a lot of breakage," he says. Such laws, therefore, need to be backed up by a massive public awareness campaign.