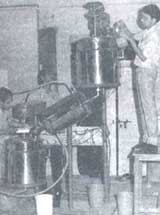 SCIENTISTS at the Tamil Nadu Agricultural University (TNAU) in Coimbatore have successfully used viruses to control pests. Mass production units are now being set up to meet the rapidly increasing demand for these viruses, says P C Sundara Babu, head of the entomology department at TNAU.

TNAU scientists are using viruses to control three insects -- the American bollworm, the tobacco cutworm and the red hairy caterpillar that attacks the groundnut crop. The American bollworm affects about 40 to 50 crops, including major ones like cotton, chickpea and tomato. The virus isolated to control this pest is known as the Nuclear Polyhedrosis Virus (NPV). NPV has been tried in combination with other control agents and its efficacy has been proved in field conditions. Since NPV is sensitive to ultra violet (UV) rays during sunshine, it has to be sprayed in the evening. This virus is species-specific and does not affect other organisms.

The insect is cultured on a semi-synthetic diet. During the larval stage, the caterpillar is inoculated with the virus. Within a week, the caterpillar gets infected and dies. The dead caterpillar is put in water and on decomposition, it releases the virus. Using a centrifuge, the virus particles are collected and purified. The purified virus can be stored at room temperature for three years and in a refrigerator for 15-20 years. The virus has to be mixed with a wetting agent before it is sprayed onto the crop.

NPV has been successfully used as a control agent on a 200-ha demonstration plot and is being marketed at a cost of Rs 70 per 100 larval equivalents. The virus to control the tobacco cutworm is also being sold at the same price. The production technology for the virus controlling the red hairy caterpillar is, however, yet to be commercialised.

Scientists in TNAU are also working on the Granulosis Virus (GV), which was isolated from the sugarcane early shoot borer by scientists at the Sugarcane Breeding Institute in Coimbatore. GV has been cultured at TNAU and is being sold at Rs 100 per larval equivalent.

Though the technology for mass production of these viruses is simple enough to be set up in small district headquarters, what is important is quality control. The technology has been handed over for commercialisation to the Biotech Consortium (India) Ltd, set up by the Department of Biotechnology. Some farmers and agriculture students have set up production units. The demand for such biocontrol agents is bound to increase because of the distinct advantages these possess over insecticides. But procuring finances to set up such units is difficult, and so TNAU scientists feel institutions like the National Bank for Agriculture and Rural Development should provide the necessary financial assistance. State governments too can help interested entrepreneurs with registering their production units, a prerequisite for any unit producing viruses.

Scientists at TNAU are surveying other potential viruses, especially those that can withstand UV light so that farmers can use them during the day. However, Babu cautions against using a single biocontrol agent and argues that more than one biocontrol agent should be produced to retard the build-up of resistance in pests.