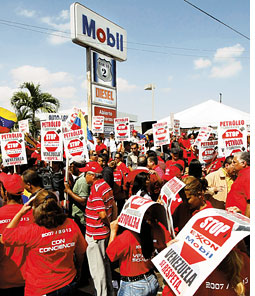 Barely a week after the Venezuelan president Hugo Chavez threatened to halt oil shipments to the us, the socialist leader has sent a placatory message, saying the country is not preparing to cut off oil supply to the us.

"We don't have plans to stop sending oil to the us,' said Chavez on February 17 during a visit to heavy-oil projects in Venezuela's petroleum-rich Orinoco river basin that the government nationalized in May last year. Chavez, however, reiterated Venezuela's right to control its resources and indicated he may cut off supplies to the us if Washington "attacks Venezuela or tries to harm' the nation.

Venezuela is the fourth largest oil supplier to the us.