For want of iodine 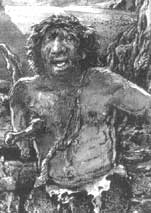 THE fossil record of Neanderthals abruptly ends about 30,000 years ago. Why Neanderthals suddenly went extinct is a topic of much debate even today. Some experts suggest that they may have lost a "fight" with the more tech nologically- advanced Homo sapiens sapiens, while others say interbreeding with them diluted their characteristics. Over the ages, there have been many more explanations.

Jerome Dobson, a geographer at the Oak Ridge National Laboratory in Tennessee, USA, offers yet another explanation. He claims to have found evidence suggesting that the cause of their extinction may have been iodine. The skeletons of Neanderthals bear signs of physical deformities and possibly impaired mental health, says Dobson. According to him, an iodine-deficient diet may have been responsible for the physical differences between the Neanderthals and the modern humans.

The findings suggest that Neanderthals could have been anatomically similar to modern humans. But what made them different from modern humans is a history of iodine-deficiency diseases, like cretinism. In modern humans, an iodine- deficient diet may lead to goitre, an enlargement of the thyroid gland. Worse still, it may cause cretinism which leads to physical and mental retardation because of the failure of the gland to develop.

According to the World Health Organisation, at present, about 750 million people suffer from goitre and 5.7 million people are cretins around the w0f1d. It is estimated that 30 per cent of the world's population is at risk of iodine- deficimry-diseases.

While ex-amining the differences between coastal and inland populations, it struck to Dobson that Neanderthals mainly inhabited iodine- deficient areas in interior Europe. He examined 300 Neanderthal skeletons in museum collections around the world and compared them to 17 cretin skeletons in Basel, Switzerland, and Philadelphia, USA. A careful study of the skeletons and medical descriptions revealed too many similarities, says Dobson. For instance, cretin& had bulging brow ridges like the Neanderthals. Similarly, they seemed to suffer from many degenerative joint diseases that afflicted the Neanderthals too. Thus, he concluded that iodine made all the difference in Neanderthals' physical and mental being.

Dobson's analysis leaves open two theories for experts to probe into: continuity or replacement. The former suggests that the Neanderthals may have they changed their diets to include more iodine-rich foods and certain Neanderthal physical traits did not persist though qieir genes continued into later European populations.

The replacement theory suggests that "iodine deficiency among 'Neanderthals may explain why they were so easily replaced by Cro-Magnons", modern humans who arrived in Europe 40,000 years ago.